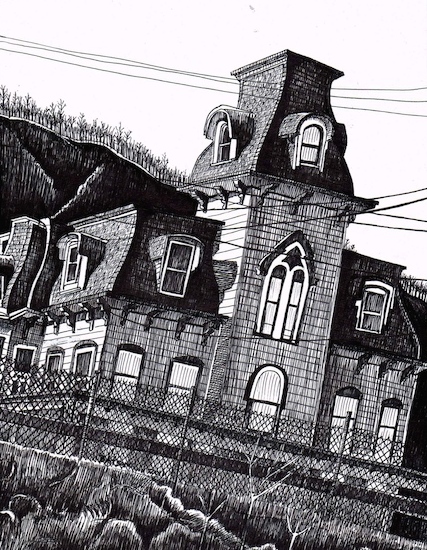 This building in Haverstraw, the subject of Edward Hopper’s 1925 painting, House by the Railroad, maintains its vigil on Route 9W. Hopper’s haunting depiction of the three-story house came to the attention of the cast and crew of Alfred Hitchcock’s movie classic, Psycho. The painting inspired not only the design of the Bates Mansion in the 1960 production, but the mood of the film as well.

House by the Railroad captures the fading elegance of this victorian-style home, located just south of St. Peter’s Cemetery. His composition shows a solitary structure, cut off from the world by a set of railroad tracks. Today, the building is still visually incarcerated by a heavily trafficked road, power lines, a chain linked fence and the railroad that gave the original painting its name and theme. 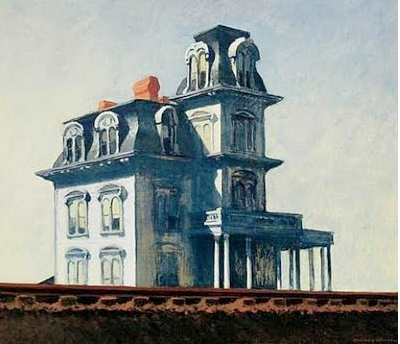 In Hitchcock’s film, a newly constructed interstate highway isolates the Bates motel and mansion, stranding Norman Bates, portrayed by Tony Perkins, to stew in his psychosis.

During the 18th and then 19th century, the location of railroad lines and highways would pick economic winners and losers. If you didn’t have a trains stop or off ramp, businesses and families would relocate to towns more connected to regional transportation. Hopper’s painting and Hitchcock’s film reflect on how these abrupt disruption impact the human personality. 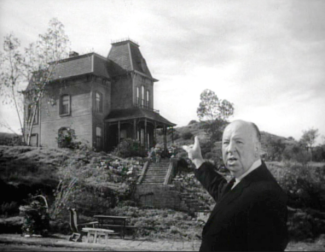 In 1919, Rockland County Attorney General, Thomas Gagan, bought the house. His daughter, Amo, lived there for 50 years. According to legend, as a 13-year old, she saw Hopper seated at his portable easel on the gravel sidings of the train track creating the painting that would become a masterpiece of American art and the prototype for an iconic image from American cinema. I chose the same perspective for my sketch. 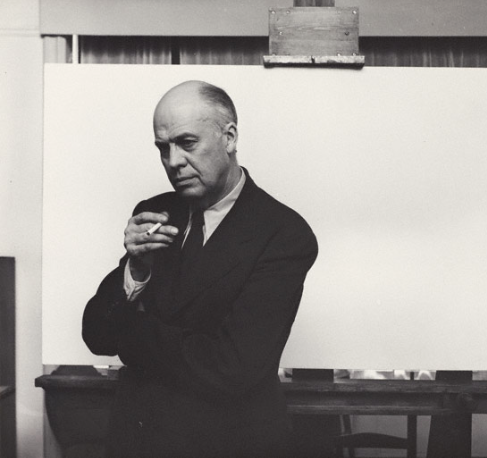 The current owners have restored the exterior of the house to a pristine state that would have pleased Hopper and Hitchcock.  The lawn is manicured, the original clapboard and windows have been expertly restored.  With its widow’s peak, curved mansard roof, and shut blinds, I thought I had stumbled upon an architectural time capsule. The building came to life as the door swung open and I met the owner, Lori.

Lori and her husband, Edwin, are the loving stewards of this American treasure.  Edwin didn’t know the Hopper-Hitchcock connection when he acquired the property.  He soon noticed that cars would pull into his driveway to marvel in silence or snap photos of his house.  Now, reproductions of the Hopper painting, as well as renditions by friends and relatives, adorn the interior of the house (except in rooms formed by the hourglass-shaped roof with sloping walls that cannot accommodate hanging pictures.) 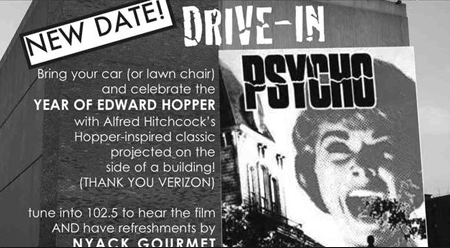 The construction of railroads, highways and bridges have caused upheaval in American communities for over a century. In Nyack, a railroad has come and gone, one highway and two major bridge construction projects have taken homes, and our connection to the public transportation grid remains tenuous.

Thanks to the efforts of the Edward Hopper House Art Center, and artists like Kris Burns, who screened Psycho on the side of the Verizon building in 2012, the artist who was skeptical of the benefits of transportation developments, attracts the traffic of cultural tourists to Nyack.