The scheduled activities for Nyack’s annual Halloween Parade on Sat at 5:30p suggests it must be the Year of The Zombie. 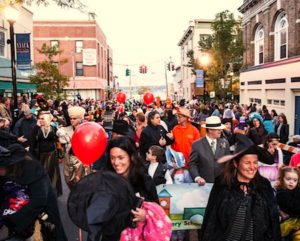 Nyack’s first-ever Zombie Apocalypse crawl, led by local author Linda Zimmerman, will kick off right before the parade begins. All zombies should meet in Memorial Park in Nyack at 4:30p. Just to prove that zombies cannot live on brains alone, participants are encouraged to bring canned nonperishable food goods as a donation to People to People before crawling at 5p just prior to the full parade at 5:30p. Wanna walk like a zombie in full public view? Visit HvZombie.com for more details.

The 27th annual Nyack Halloween Parade is the largest parade of its kind outside New York City. Organized by the Nyack Chamber of commerce, over 25,000 spectators are expected to line the streets of Main and Broadway.

Marchers and floats will assemble at 4p in Memorial Park at the corner of Depew and Piermont Streets in downtown Nyack. All are welcome to march and to register for prizes. The winner of this year’s Best Float competition will take home a $750 cash prize. Floats winning second and third place will receive $500 and $250 respectively. Prizes for costumes will be awarded in seven categories with awards ranging from $25 to $200. Registration is required to be eligible for prizes.

OK, it’s not just about the zombies. There’s something in it for runners and children of all ages, too. The Village of Nyack will host its first Halloween costume run — the “Witch Way 5K” — starting at 9a in Memorial Park. A kids’ run/costume parade — the “Boo Run 1K” — will begin at 9:45am. Runners can register at www.RaceAwesome.com.

If you are worried about grabbing a good spot along the parade route, here’s motivation to arrive early: there will be  live music in the municipal parking lot on Main Street and Artopee Way from 3-5p featuring Cult of Aphrodite and The Year Off, sponsored by provided by Anjel Blue Rehearsal Studios. The evening continues post-parade with a gala awards ceremony and music with Frankie D and The Boys.