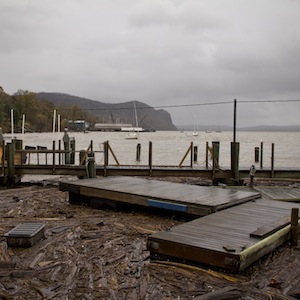 “Rivercrest, a six-story, 95-unit cooperative perched beside the Hudson River in Nyack, proved to be prophetically named when Superstorm Sandy unleashed its fury in October 2012,” writes Bill Morris in the condo and co-op magazine Habitat. “The river crested its banks, pouring water into the co-op’s lobby and its below-grade community room and boiler and laundry rooms.” Habitat wrote about the Nyack co-op apartments at the end of Gedney Street which suffered $200,000 worth of damage two years ago when the remnants of Hurricane Sandy wrecked havoc in Nyack, Rockland County and the Lower Hudson Valley.

Because co-ops and condos are considered businesses, they are ineligible for federal disaster grants. And since Rivercrest is situated in a designated flood plain on the banks of the Hudson River, it couldn’t purchase commercial flood insurance, either. Rivercrest Board of Directors President Alfred Kramer told Habitat that although FEMA did an inspection of the damage caused by the storm surge, they “didn’t give us a dime.”

Read the complete story at A Tough, Expensive Recovery for the Sandy-Damaged Rivercrest Co-op at HabitatMag.com