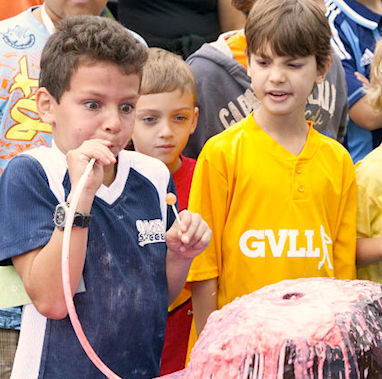 Lamont-Doherty Earth Observatory opens its doors to the public on Sat Oct 11 from 10a-4p for its annual Open House where scientists share what they have been up to over the last year. It’s a place to learn what makes some volcanoes more explosive than others; how deep ocean currents circulate the globe; and what tree rings can tell us about climate change today and in in the past. Researchers also share some of their tools for exploration, from unmanned robot submarines to portable seismometers to mass spectrometers that measure tiny bits of matter.

Whether you’re an aspiring young scientist or a long-time science enthusiast, you’re sure to enjoy the talks and demonstrations at the Lamont-Doherty’s Open House. Tour a lab, participate in hands-on earth science demonstrations, and learn from world-renowned researchers about their latest discoveries.

This year we feature a few new exhibits:

Everyone is invited to hear lectures in the Monell Auditorium from:

Please join us for the 2014 Lamont-Doherty Open House on Saturday, October 11 from 10a-4p at 61 Route 9W, Palisades, NY and follow us on Twitter at #LamontOH. Parking for the Open House will be available at the IBM Palisades Conference Center on Route 9W, just north of the LDEO campus. Shuttle buses run continuously from 10a-4p, arriving and departing from the Geoscience building at LDEO.

Kim Martineau is a Science Writer at the Lamont-Doherty Earth Observatory in Palisades, NY.