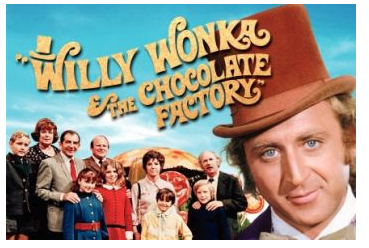 Willy Wonka and the Chocolate Factory was released in 1971. Although it was not an initial box office success, it has attained cult classic status. The film is an adaptation of the 1964 novel of the same name by Roald Dahl.

Past pop-up screenings by Burns included a selection of shorts by Rivertown Film and Alfred Hitchcock’s “Psycho,” which was chosen because that thriller drew inspiration from a painting by the legendary artist and Nyack native son, Edward Hopper.

Movie goers can sit in their car and tune into a simultaneous broadcast of the film on their radio, or bring lawn chairs and picnic under the stars. The village will change the direction of the parking lot from north south to west east for the screening. The screening is free of charge.

Responding to the popularity of her pop-up movie projections, Burns is launching a crowd-source funding campaign to encourage people to chip in for a summer outdoor series in Nyack in 2015.  “People who contribute can help to select the films and have their name and/or portrait projected on buildings downtown before the series,” said Burns.