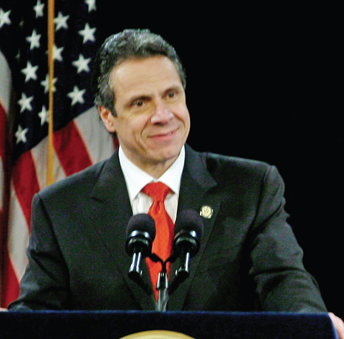 They say the real election campaign doesn’t start until after Labor Day. At least that’s what supporters of Andrew Cuomo’s challengers are hoping after the release of the latest Quinnipiac University Poll showing New York’s governor crushing the competition if the election were held today. Cuomo handily defeats Republican challenger and Westchester County Executive Rob Astorino by a 2-1 margin (56% to 28%).

“Is the governor’s race all over? Did it ever start?” asks Maurice Carroll, assistant director of the Quinnipiac University Poll. “Westchester County Executive Rob Astorino gets only the standard Republican numbers. Voters give Gov. Cuomo a big lead and say he deserves reelection.”

Cuomo’s challenger in the September Democratic primary fares even worse. Zephyr Teachout, a Fordham University law professor who is vying for the Democratic guberatorial nomination, gets an 88-percent don’t-know-enough score. The Green Party general election candidate, Howie Hawkins, is unknown to almost nine out of ten voters.

“As they have in the past, voters say government corruption is a big New York problem. How is Gov. Andrew Cuomo doing in handling ethics problems? Not too hot, voters say. In fact, voters say he’s part of the problem, not part of the solution,” says Carroll.

Despite the negative publicity over the governor’s decision to end the Moreland Commission, the percent of voters who say they will re-elect Andrew Cuomo hasn’t changed significantly. In May 57% said they would vote for him if the election was held today; August polling showed a loss of one percentage point. More than half of the voters say they don’t know enough about the Moreland Commission to have an opinion. However, among those that know about the governor’s actions to dissolve the committee to investigate political corruption, 37-8% say that the administration interfered with the commissions work.

For a complete list of survey questions in this survey and the percent of people who answered, visit the
Quinnipiac University Poll.