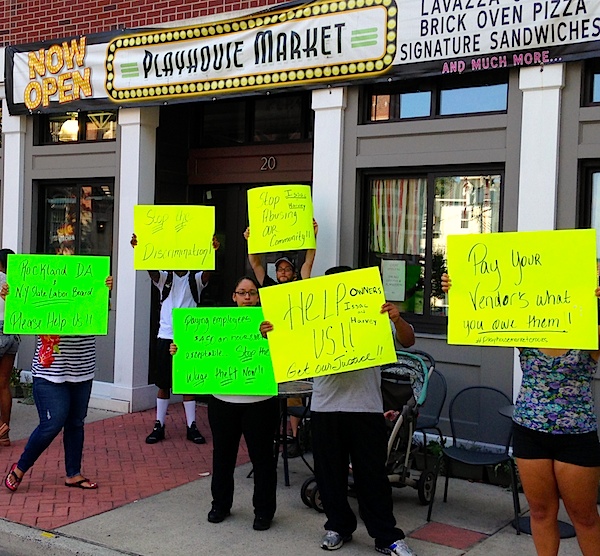 In the Broadway musical The Producers, two insincere impresarios hatch a scheme to make money from a theatrical flop. Benny Daniels says the owners of Nyack’s Playhouse Market tried a similar strategy at the restaurant they opened last Spring on South Broadway on the former site of the Tappan Zee Playhouse.

Daniels says the principals at the Playhouse Market committed business and tax fraud. “They took money from a lot of employees under the assumption that [the employees] would get a portion of the proceeds from the restaurant. But they took the money and ran.”

“I came up with the concept and designed the entire indoor market,” says Daniels, who is principally a chef but whose assignment at the Playhouse Market included hiring staff and refurbishing apartments on the second floor of the building.  “I’ve always wanted to do a market. Originally I wanted to purchase the building but the owners asked me to work for them. After they hired my pizza chef, my executive chef and several other people I recommended, we finally got the truth about the owners: they were doing so much illegal behavior inside.” Daniels says he parted ways with the Playhouse Market in April after being unable to collect any of the more than $39,000 that owners Isaac Hershko and Harvey Weissman had promised to pay.

Last week the Journal News posted a short video of a Playhouse employee whose predicament echoes The Producers story line. The former pizza chef at the restaurant says the owners borrowed money from him but now refuse to pay it back. “That was Issac Hershko,” said Fernando Arellano, the former pizza chef at the shuttered Playhouse Market. “I lent him $25,000 to buy equipment. Now he doesn’t want to pay me.” Arellano, who had been living in the upstairs apartments, says that Hershko has also threatened to call U.S. Immigration in retaliation.

Daniels also claims that the Playhouse Market was double charging customers for their sales tax and didn’t have Workman’s Compensation insurance for their employees. He also alleges the market didn’t pay overtime and that some staff were paid less than the minimum wage. Daniels helped organize a protest with ex-employees in front of the market for three days last week.

Meanwhile, a spokesperson for the Playhouse Market says it will re-open. “Playhouse Market vehemently denies any and all accusations by the employees. Each and every employee has been paid their wages in accordance with the law,” says Risa Hoag, president of GMG Public Relations. “The protesters and people that are commenting online and on Facebook are defaming and lying about everything. Playhouse Market has documentary proof in the form of canceled checks and other documents that they are lying and they will soon find themselves facing a defamation lawsuit. In fact, some of the commentators on Facebook have never worked for Playhouse Market nor do they know any details that can support what they’re claiming. Some of the protesters who conveniently claim that money was stolen from them are in the process of being evicted from the apartments above the Playhouse Market for not paying rent so their motive for lying is obvious.”

Daniels says about 30 employees and vendors have been impacted by the closing.