“Working with my colleagues in the Senate, we were able to secure a grant that will finally [let Nyack] complete this project,” said Carlucci. “It makes it easier when it comes from the ground up…when the community really comes together and sees that vision.”

Nyack Needs A Skatepark has raised a total of $175,000 to design and build this sports facility. Last month, a foundation created by skateboarding legend Tony Hawk pledged $25,000 to the project. “It is an absolute honor to receive this award from an organization that is admired and venerated throughout the country, and indeed the world,” said Sarah Anderson of Nyack Needs A Skatepark. “Formal recognition by the Tony Hawk Foundation gives true legs to our project, and we now run with determination to the finish line.” The Tony Hawk Foundation provides grants and technical assistance to grassroots citizen groups to build free, public skateparks across the U.S. 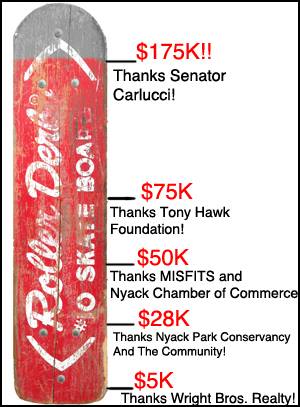 Carlucci made the announcement at a special meeting at Nyack’s Village Hall on Aug 6 attended by about 65 skate park supporters. Also on hand for the announcement was Jerry Only from the legendary punk rock group, The Misfits. The band and the Nyack Chamber of Commerce teamed up for a benefit concert last May which raised $22,000 for the skate park project.

Action Sport Design has been selected to design Nyack’s new skatepark. Mike McIntyre, a principal at the firm, presented possible skate park configurations at the Wed night meeting and led a discussion about which features the public would like to see incorporated into the skate park. 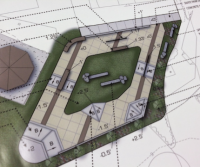 The Nyack Skate Park is being designed by Stantec’s Action Sport, which specializes in creating unique skate parks. The company put together a preliminary design for the skateboard area for the Tony Hawk Foundation grant application, but that design was presented on Wednesday night only as the basis for discussion on features that could be included.

Here’s what’s been proposed for the skateboard area:

Features: Seating areas; natural area for aesthetics and to retain water that will run off the concrete skating area.

Require a green space area so the skatepark is not just a “slab of concrete.”

Design suggestions from the public include: