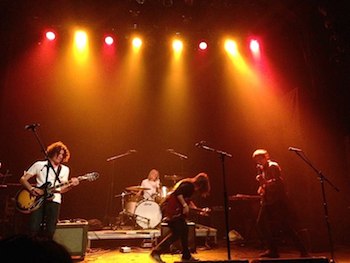 If you don’t live in New York City, you may not be familiar with the Mercury Lounge on the Lower East Side. Known for launching the careers of NYC bands like the Strokes, Mercury Lounge hosts up-and-coming local, national, and international acts seven nights a week. On Saturday, Aug 16 we will open for the Attic Ends at the Mercury Lounge.

It also remains a favorite of widely successful artists like MGMT and the National who want to recapture the intimacy of their earliest shows as a struggling band. Brooklyn’s The National chose the venue for the release of their most recent album, 2013’s Trouble Will Find Me. Tickets (at $10 a piece) sold out in hours. A week later, the band headlined neighboring Barclay’s Center to a sold-out crowd of 18,000 fans.

At first glance, it’s a dive bar: a dimly lit, 200-capacity room with old brick walls, and sticky, beer-soaked floors. At the same time, it boasts the best sound and lighting of any comparably sized New York City venue. The space, formerly a tombstone store, was purchased two decades ago by the Bowery Presents, a production company that hosts shows at venues ranging in capacity from 600 people (The Bowery Ballroom), to 20,000 (Madison Square Garden). The Bowery Presents gained recognition in the late 90s and early 2000s for putting on good concerts in a number of interesting New York City spaces, for a very reasonable ticket price. While New York is arguably one of America’s best music cities, sometimes it’s difficult to stand out simply because of the sheer number of bands that exist. The folks at Mercury Lounge have a knack for bringing great up and coming talent into the spotlight; what separates the venue from others of its size is the quality of entertainment.

Saturday’s show will be our third performance at Mercury Lounge.

It’s easy to forget that despite this being the first time we’ve been asked to open a show at the venue, that doesn’t mean people are just going to show up. Given the structure of today’s music industry, the “indie-rock” name tag is as much of an ethos as it is a genre, at the end of the day the band is responsible for packing the room.

Earlier this year, standing in the lobby of the West Village IFC at the premier of the National’s documentary film, I spoke to frontman Matt Berninger, who recalled the band’s first Mercury Lounge gig. “Forty people came…I went home and cried.” We both laughed.

“I love that place,” he added.

Returning to play Mercury Lounge a decade later, after world tours and packed arenas, must have been a strangely full-circle experience for the members of the National, now in their late 30s and early 40s. Of course, of the dozens of acts that pass through Mercury Lounge in a given week, not many will become the National.

Even so, the venue is a nice reminder that in our age of Justin Bieber and EDM there are folks who are still willing to take a chance on real music.