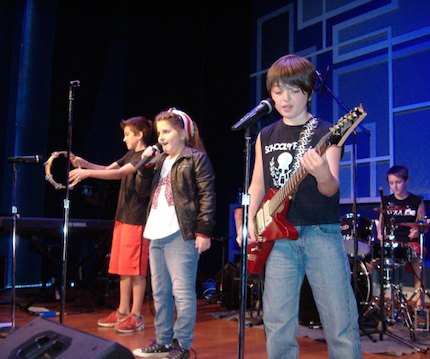 When the Byrds wrote “So You Want To Be A Rock ‘n Roll Star” in 1967, their formula for success was to get an electric guitar and comb your hair just right. Today, if your kid wants to learn to Rock ‘n Roll, they can go to  the School of Rock in Blauvelt, NY.

Run by director Shuman Roy and other real life rock musicians, the camp offers several five-day camps with different musical themes, all ending with a grand finale concert for family and friends. 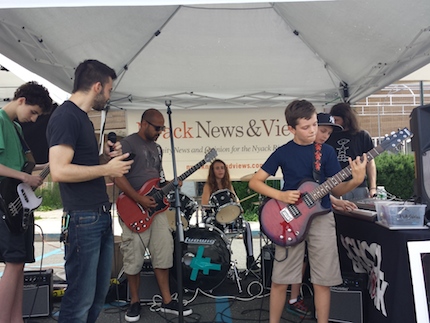 This summer, campers were invited to show their stuff at the Nyack Farmer’s Market to thrilled crowds on several Saturday afternoons—a pleasure to market-goers and campers alike. On Sat Aug 16 you can hear a band of campers perform a set of tunes from the Foo-Fighters.

The School of Rock staff inspire students to learn more than just how to play an instrument, or to sing in standard music lessons.  Campers are taught how to practice properly with discipline, work as part of a team, develop self-confidence and most importantly enjoy all kinds of music.  The diversity of their staff brings a wealth of talent and experience to the camp, and the campers have as well rounded an experience as they come. 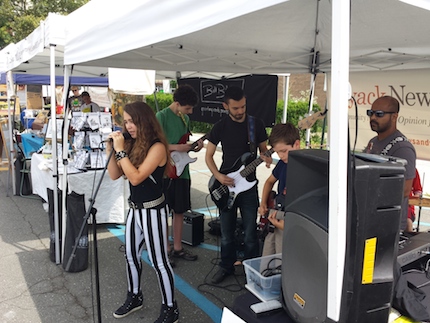 One recent Saturday in Nyack, the campers were booked to do a “Heavy Metal” set at the Farmers Market.  Family members and the audience watched as an authentic rock and roll euphoric energy animated the group. One of the campers came decked out in black and white wide-striped leggings—her hair long and a little wild, her black high tops and confident walk were the icing on the cake. The crowd gathered and she took to the drums, then the bass guitar, then she sang! The crowd went wild! Three generations of her family stood in front of the crowd, her grandfather gesturing for the music to be louder, and her mother was transfixed and beaming. 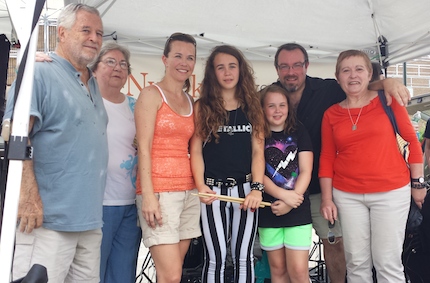 Sophia Hanley is that talented and well-rounded 12 year old. She practices acrobatics, sings in chorus, plays softball, reads and loves scary movies. “This has been a totally new experience for me,” she said, “what I loved most about it was not only playing music, but getting to play with other kids and feeling the passion for the music.” She went on to say the School of Rock was one of her “favorite and most inspirational experiences.” Sophia’s mother, Kristin, shared the same enthusiasm as her daughter. “Sophia loved it,” she exclaimed. “It was the first time she sang solo in front of anybody. They had her playing bass guitar in rehearsal, an instrument she had never touched before.” She said Sophia would come home and practice for at least two additional hours a day to make sure she learned the new material. That’s inspiration.

Next year the summer camp will be offering Kiss Army Boot Camp, Led Zeppelin Boot Camp, Nirvana Camp, another Metal camp and a British Invasion Camp covering The Beatles, The Rolling Stones and The Who.

The School of Rock is gearing up now for the new school year. They offer after school programs where the students rehearse from September to January. Students get a 45-minute weekly individual lesson on their instrument and have a three hour weekly rehearsal, culminating in a live show at a local venue.

In this article:School of Rock