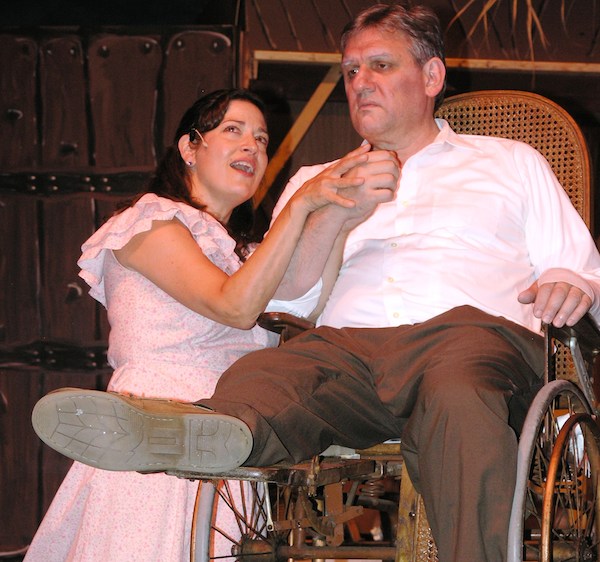 A community theatre production of a 1956 Frank Loesser show is also something of a family affair for a Nyack mother and daughter.

The Mt. Pleasant Community Theater production of “Most Happy Fella” features Nyack resident Julie Wendholt as Rosabella in the female leading role. The show will be performed at the John Whearty Theater at Westlake High School in Westchester County on Aug 8-10 and 15-16.

Wendholt is appearing for the first time with her 12-year-old daughter Erin, an ensemble member, debuting in her first full adult production after extensive involvement with childrens’ theater.

Wendholt appears opposite White Plains resident Steve Taylor who plays Tony, her love interest. “Steve and I started working together two years ago when we performed together as Lily and Archibald Craven in ‘The Secret Garden’ at the Elmwood Playhouse in Nyack,” Wendholt says. “This was followed by a benefit concert for the Nyack Center and recently appearing together in a concert benefiting the Teen Center in Croton.”

The Indiana native grew up on a farm listening to opera with other members of her Italian family. She came to New York after earning a master’s degree from Indiana University’s Jacobs School of Music and meeting and marrying her husband, Scott, a professional trumpeter who performs jazz and in Broadway shows. Wendholt pursued a regional opera career for seven years, but after realizing that “she was not going to make it to the Met,” pursued other avenues, including raising her daughter and twin brother Kyle, running a voice studio and working as a massage therapist for the past 15 years.

Directed and choreographed by Rose Cremonese-Norton

“The Most Happy Fella,” the 44th performance by the Mt. Pleasant group since its founding in 1970, has book, music and lyrics by Frank Loesser. The musical, about a romance between an older man and a younger woman, ran for 676 performances when originally presented on Broadway, and has enjoyed several revivals.