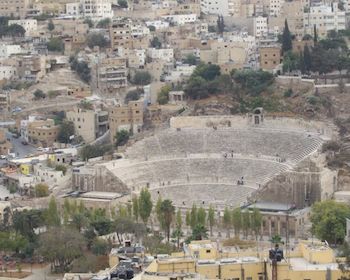 Who knows what to expect in the Middle East? As the son of an Israeli immigrant, I have travelled to Israel many times and know firsthand how unpredictable the region can be. But I had never traveled to an Arab country before, and I was a bit nervous about being Jewish, American, and of Israeli descent.

Before I studied abroad in Jordan, I decided to keep these aspects of my identity to myself for the month I was there. I only predicted the worst reactions to Jordanians finding out these things about me. This fear was only amplified by the demographics of the nation. Roughly half of the Jordanian population is of Palestinian origin, possibly increasing hostility towards my Israeli heritage.

Dangerous developments in the region during my stay made me more anxious. The current conflict between Israel and Hamas in the Gaza Strip increased aggression in the region and the terrorist group the Islamic State (previously known by the acronym ISIS) captured a town in Iraq near the Jordanian border.

Fortunately, I did not have any trouble and absolutely loved my time in Jordan. I was able to travel around and see the cultural and physical beauty of the country. From the port town of Aqaba on the Read Sea to the stone city of Petra to the capital of Amman, I was always impressed with what I saw.

But one of the things that amazed me most was the genuineness of the people. They were raw. What you see is what you get. People would literally walk with me and my friends to show us where to go if we were lost. I saw a kindness and hospitality that simply does not exist in America.

There were many other aspects of my trip that I was not used to. For instance, Jordan is a conservative and Islamic country. Most women wear hijabs, or head scarves, while other women are covered from head to toe. This is obviously something one doesn’t see very often in America. Along with this come many cultural norms. For instance, unless four women are travelling together, it is socially unacceptable for a woman to sit in the passenger seat of a taxi.

A large part of my trip also overlapped with the Islamic holy month of Ramadan, which started about a week into my trip. There was a visible change in the country. Restaurants were shut down during the day (Muslims fast during this month), people appeared fatigued and overall things moved at a slower pace. This was a completely new experience for me and gave me a glimpse at a life I had never observed before.

This trip as a whole was a great learning experience. I immersed myself in a culture unlike any I had interacted with before and was exposed to a beautiful country full of pleasant surprises. Hopefully I will return one day to experience more of this beauty.

Tal Axelrod is a junior at Northwestern University’s Medill School of Journalism.

In this article:_intern, Tal Axelrod