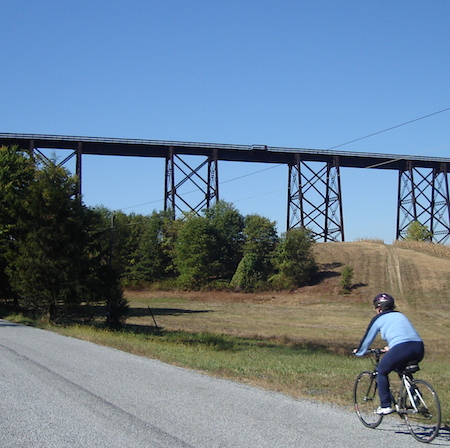 Bicycling is booming. Just take a look around and you’ll see more bicycles than ever: on local pathways, riding down Main Street, locked up in front of stores…people are taking to bicycles in record numbers, both as a way to get around and as a form of recreation. It has long been thought that only young people were fueling this boom. But now studies have shown that a significant share of the growth in bicycling is coming from older people entering retirement age. Given the broad appeal of bicycling across these age groups, two things are certain: cycling is here to stay, and the number of people who take to two wheels is forecast to continue to grow.

It is hoped that many people can be encouraged to take to bicycles as a form of local transportation: getting to work, getting to the store…as a clean alternative to driving a car. This will mean less congestion on local roads and less pollution. But what about bicycling as a vacation? Perhaps the appeal of bicycling as a recreational activity will translate into a vacation choice?

Tourism officials remind ambivalent NIMBY-ists that cycling isn’t just about them — it has a big upside for locals, regardless if they like or loathe bikers.

Executive Director of Dutchess County Tourism Mary Kay Vrba says that Hudson Valley tourism is a $4.7B business, bringing jobs and tax revenue in addition to tourists. “If wasn’t for tourism in Dutchess County, our property taxes would be $800 higher each year,” she says.

Many people are betting that it will. The number of new regional recreational trails has increased across the country with some trails stretching for hundreds of miles – perfect for a cycling vacation. In our own region, we seen many local trailways begin to have a huge presence. For example, in Westchester, trailways are the #1 county park in terms of usage. Some local rail trails, such as the old Putnam Line, stretch on for 50 miles, offering some riders a big day ride, or a two-day journey for those looking to ride fewer miles per day.

Our regional trailway system is about to take a great leap forward with the addition of a new bike/pedestrian path on the New NY Bridge – the replacement for the Tappan Zee Bridge. Such a facility will undoubtedly be a huge tourist attraction for cyclists, much like the Walkway Over the Hudson is today, a popular tourist destination in Poughkeepsie which now attracts half a million visitors a year. The future bike path on the Tappan Zee might even serve as a gateway for regional bike tourism that begins in the New York Metro Area.

What’s great about bicycle tourism is that this type of activity isn’t just “green” in terms of low impact to the environment. It also means “green” in the pockets of local business owners, who can capitalize on the sales that bicycle tourists bring. And Rockland County could be uniquely positioned for this once the new bridge opens.

camping B&B tours to locations outside of the New York City including the Hudson Valley, Montauk/Eastern Long Island and Cream Ridge Vineyard in New Jersey. All of the tours start and end at Metro-North or LIRR stations. For more information visit GothamBikeTours.com or call 917-748-1119.