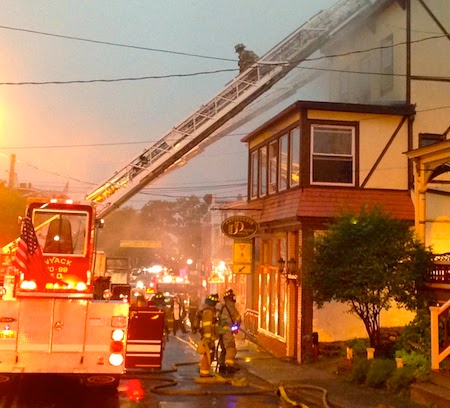 Nyack, July 2 — Lightning from a severe thunderstorm is believed to be the cause of a fire that damaged the building where the Patisserie Didier Dumas is located on Main Street in Nyack.

Although the lightning strike caused a fire that did heavy damage to an attic and third-story apartment, no one was injured and the fire did not spread to adjacent buildings at the site west of Franklin Street.

The popular Patisserie Didier Dumas pastry shop on the ground floor of the 163/165 Main St. building was open when the lightning strike took place. A resident of a second-floor apartment who was home at the time alerted a store worker and customers to the fire that was started by the lightning strike and the building and its apartments were safely evacuated.

Nyack Fire Department Deputy Chief Vincent Reid and Battalion Chief John Galietta said no one was injured in the building and no firefighters were hurt battling the blaze. Village of Nyack building and fire inspectors ordered the building closed until further inspections could be done. Pastry chef and owner Didier Dumas said he hoped the shop could open again in about a few weeks.

Dumas said he was happy that no one was injured and he thanked the volunteer firefighters for battling the blaze and preventing the fire from spreading.

The French bakery, which first opened in 2006,  sustained smoke damage from the blaze. Firefighters said the lightning strike may have caused structural damage.

Residents of the upstairs apartments in the 3 1/2 story building said they would be staying with relatives until they could return home.

Workers in stores on the opposite side of Main Street said they saw and heard the lightning strike that set off the fire.

“It was like being in Afghanistan again,” said Brendan Arroyo, a U.S. Army veteran who served in Iraq and Afghanistan. Arroyo owns the New York Sneaker Society on Main Street.

Galietta said he saw smoke pouring from the top of the building when he arrived. Several holes were cut in the roof and in the side of the building to give firefighters access to the blaze.

Fire crews battled a heavy fire that had engulfed the third-story and attic according to Reid. He said firefighters had to cope with intense heat and had to extinguish pockets of fire in the walls.

Volunteer firefighters from Piermont, Central Nyack, West Nyack, Valley Cottage and Congers were called to assist in the battle against the fire. Reid said the extra manpower was needed because of the hot weather conditions.

A series of severe, early summer thunderstorms, packing heavy rain, high wind gusts and frequent lighting strikes, pummeled the region late this afternoon, knocking out electric service to about 12,000 Orange and Rockland Utilities electric customers. Service had been restored to about half of those customers by 9:15p.