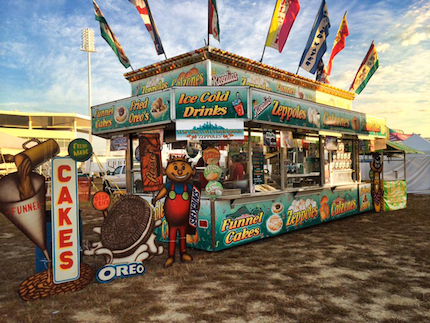 Come to the carnival at The Palisades Center, June 6-22. The Palisades Fair has a petting zoo and a Banana Derby where monkeys race on the backs of dogs. Come for the camel rides or be amazed at the magic of illusionist Lance Gifford. Try the full menu of fair foods including funnel cakes, zeppoles, Italian sausages, candy apples and pizza. 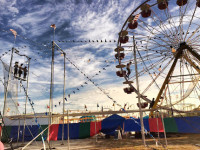 Did you know that cotton candy was originally named Fairy Floss and appeared in Europe in the 1800s? It wasn’t widely available until an American dentist named William Morrison invented the first cotton candy maker in 1897. Along with confectioner John C. Wharton they introduced Fairy Floss at the 1904 World’s fair. It was a huge success, selling over 65,000 boxes of the spun sugar.

The first Ferris wheel was erected at the Chicago’s World fair in 1893. Designed by Pittsburgh engineer George Washington Gale Ferris Jr., the design called for two 140-foot tall towers that bore the weight of the 250-foot tall by 825-feet wide wheel. Held together by 45 foot axles, each of the 36 cars was able to carry up to 60 riders at one time. The original Ferris wheel was demolished in 1906.

The first true traveling carnival was seen at the 1893 Chicago’s World Fair. With its many attractions including “Buffalo Bill’s Wild West Show,” a new spectator culture was born. By 1902, the number of registered moving carnivals grew to 17 and by 1937 as many as 300 could be found traveling throughout the U.S.

Many of these carnivals were edgier than today’s fair, with sideshows featuring exhibits like “Krao the Missing Link” and “Zip the Pinhead.” And some ladies who really did need a shave.

The Palisades Fair opens at 5p on weekdays and 12n on weekends. The are over 40 games, attractions and thrilling rides including the Skydiver, Himalaya and a Ferris wheel.