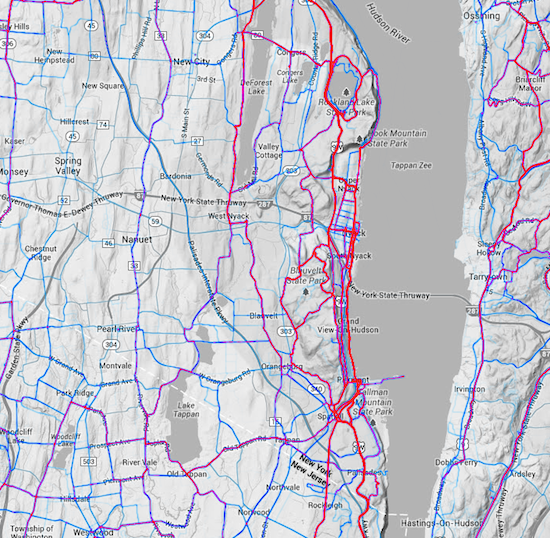 During National Bike Month, cycling advocates tout the increasing popularity of this recreational activity. The CitiBike Bike Share program is one sign of the sport’s growth. Another is the increase in the number of folks with spokes visiting Piermont, Nyack, Rockland Lake and beyond.

There’s always been some question about how many cyclists there are on the roads. On a busy summer weekend, it’s estimated that as many as 5000 cyclists will bike north to Nyack — but that can vary based on weather and seasonality. Next weekend will surely exceed that count when 7000 entrants in the 2014 Gran Fondo New York on May 18 spin through Nyack early Sunday morning.

The number of cyclists on our roads is an estimate that transportation planners crave because it can be a baseline to project how much cyclo-tourism the new “shared use” pedestrian/bicycle path on the new Tappan Zee Bridge will generate. If it proves as successful as the Walkway Over The Hudson, a tourist attraction in Poughkeepsie, our region could see as many as 500,000  visitors a year. Skeptics say our bridge won’t draw as many tourists because only the most serious jogger and cyclist will want to cross the three mile span. Truth is, no one really knows for sure.

But the people who make the Strava smartphone app have a clue. Joggers and cyclists use the free app to record their mileage on each run or ride. Strava can  track routes, speed and elevation for each individual. But the most interesting results are when the company aggregates everyone’s usage together.

Bicycles are sustainable and recreational transportation. They’re green and environmentally friendly — but not always welcomed in car-centric suburban towns. Can bikes and cars co-exist? Is there room on the roads for hikers, joggers and walkers, too? That’s one of the questions that Walk-Bike New York hopes to answer in Suffern on May 21-22. The two day symposium will cover how to create walkable and bikeable environments for people who are interested in “safety, land use, economic development, transportation, education, law enforcement, and health promotion.” For more information including registration, visit Walk-Bike New York.

Here’s a Strava “heat map” for the Lower Hudson Valley where the most frequently traveled bike routes are in red. The Nyack area “hot routes” include 9W, Piermont Road, North Broadway and Rockland Lake.

You can get an overview of any area in the US at labs.strava.com/heatmap and more detailed information is available for purchase including counts of ridership for transportation planners and advocacy groups at  metro.strava.com. It’s something the regional transportation planners might consider doing, because it’s hard to plan for the future if all you know is that somewhere between 0 and 500,000 visitors might be stopping by.