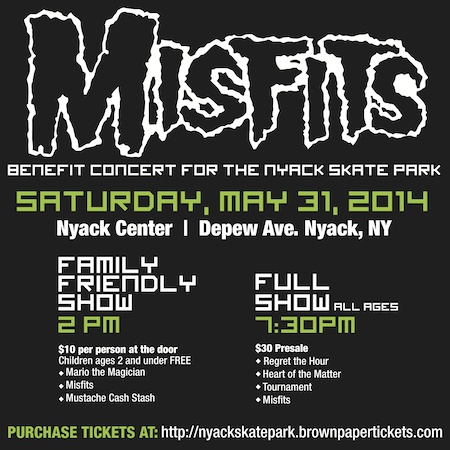 Legendary rock band Misfits think a skate plaza in Nyack’s Memorial Park is—to borrow a phrase from an unlikely source, Martha Stewart—a good thing, and they’re doing something to help make it happen. On Saturday May 31, the group will be holding two musical events at the Nyack Center—one in the afternoon for kids and families, and full-on concert at night—and donating all proceeds to the project.

The event is being sponsored by the Nyack Chamber of Commerce, which has previously backed several skate plaza-related activities, including the YouthFest and Game of S.K.A.T.E that have been held the past two years in the Riverspace parking lot. Tickets can be purchased online at Brown Paper Tickets.

The Misfits, a proto punk-horror band founded in Lodi, New Jersey back in the mid-1970s, has strong ties to the Nyack community. And while the highly influential band is perhaps best known for its somewhat ghoulish stage appearance—based on a love of horror movies—and trademarked “skull” mascot, when it comes to doing things for the next generation of kids the group perhaps a more appropriate logo would be a heart.

“People in the community need to stand up and create a place where kids can excel and develop an individual identity,” says lead singer and bassist Jerry Only. “Skateparks do that, and that’s why we’re doing this. We want everybody to help give our children this.”

The daytime event, which starts at 2p, is designed so that families can bring their children to meet the Misfits in a kid-friendly environment. In addition to a short set by the Misfits, there will be performances by Mario The Magician and Mustache Cash Stash. The cost is $10 per person at the door, and kids 2 or younger get in free.

The nighttime event will be an all-ages, full-on rock show starring the Misfits, plus local two rock bands that started out in Nyack—Regret the Hour and Tournament—plus New Jersey punk rock band Heart of the Matter (HOTM). Tickets for the evening show are $30, plus a small service fee, and can be purchased online at the Misfits Brown Paper Tickets page.

A limited number of tickets, priced at $35, will be available at the door the night of the show, which kicks off at 7:30p, only if it doesn’t sell out.

VIP Package: Get a Ticket and a T-shirt

For those who’d like a souvenir from the nighttime show, there’s also a VIP package for $45 that includes admission to the show, plus a limited edition Misfits t-shirt. The t-shirts normally cost $20, so you save $5 with the VIP package. Just order the package online at the link above, and the t-shirts will be reserved for pickup at the event. Both events are being held at the Nyack Center (58 Depew Avenue), which is located on the corner of South Broadway and Depew Avenue in Nyack.

All the proceeds of the event will be donated to help build a plaza-style skate park in Nyack’s Memorial Park. The project is currently in the design phase, and the Village of Nyack has contracted with a noted Action Sports Design (ASD) to come up with a design that will be both enticing to skaters, as well as aesthetically appropriate to its location in Memorial Park. All the money for the skate plaza—a multi-use activity area that will include both active skateable features as well as passive sitting areas for spectators and those who just want to enjoy the view—is being raised by the Nyack Needs a Skatepark Committee through donations and grants.

The Misfits have been plying their own individual style of melodic punk rock music now for more than three decades, along the way influencing bands ranging from Guns N’ Roses to Metallica. While acknowledging that the band’s style of music and horror-themed attire aren’t aren’t for everyone, Jerry Only says that shouldn’t deter anyone from supporting the skate plaza effort, which along with the new basketball courts and recently reconfigured baseball field, is an important part of a planned recreational corridor in Memorial Park.

“If you don’t like the music stay home, but you can still donate to this worthy cause,” Only says. Just stop by the Nyack Center on May 31 to make a donation.

If you’d like more information about the skate plaza, visit the Nyack Needs a Skatepark Facebook page.

Jim Willcox is chairman of the Nyack Parks Commission.