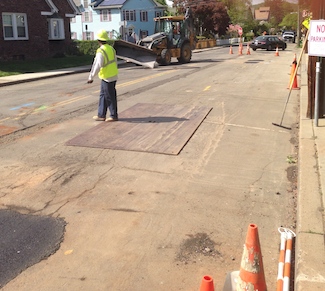 Company spokesman Mike Donovan says the three year project to convert Nyack’s gas system from low pressure to high pressure will finish in August with trenching on Broadway wrapping up sometime next month. “We have an agreement with Nyack that we will complete our work on Broadway by June 15 so that the village will be able to repave the street,” says Donovan.

Nyack Mayor Jen White says its all part of a bigger plan to repave the major North-South road through the village. “We had money set aside to pave North and South Broadway last year, but O & R unexpectedly asked us to put those plans on hold.” The local unit of Consolidated Edison asked Nyack to postpone its planned road resurfacing until O&R completed their gas main upgrades. “We reluctantly agreed to delay that portion because we understand that new gas lines will provide a substantially better and safer service for every resident,” White says.

Nyack and O&R have been coordinating schedules to make sure that portions of Broadway that were paved in 2013 won’t need to be dug up in 2014. White says O&R agreed to accept a much tighter timeline then they originally submitted to let the village complete its original plans to repave Broadway with a minimum of delay. “O&R will not be digging into our new pavement,” she says.

Although they may not be digging, crews have marked a portion of Broadway that had been previously paved for safety reasons — a standard precautionary procedure during gas line work. “If not done properly, this work can have terrifying consequences as we all saw during our Broadway ‘Bunson Burner’ incident,” says White. Two years ago, an O&R contractor struck a low-pressure gas main  at the corner of N. Broadway and First Avenue sending flames 25 feet into the air on June 21, 2012. The fire caused extensive damage to the Victoria Mews apartments at 50 North Broadway.

Nyack’s mayor says that the village has worked closely with O&R to minimize inconvenience, maximize safety control costs. “Compared to the last several decades, we’ve been  protective of taxpayer money to an unprecedented degree, demonstrated by recent budgets and tax increase records,” she says.

Advertisement. Scroll to continue reading.
In this article:gas main, orange and rockland, oru.com