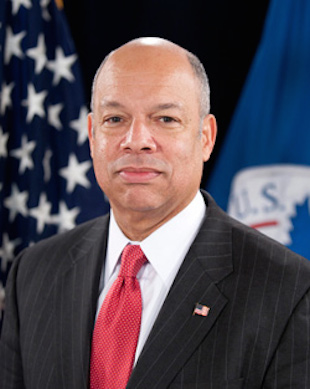 U.S. Secretary of Homeland Security Jeh Johnson will speak at Pace Law School on Thursday, April 10 at 5:30p.  The event was originally scheduled for March 31st.

Secretary Johnson will deliver Pace’s 2014 Dyson Distinguished Lecture. The lecture will be held at the Ottinger Hall, Room G02  on the Pace Law School campus in White Plains. There will be a reception following the lecture. The event is free and open to the public, but seats are limited. To RSVP contact Brenda Thornton at 914 422 4213 or go to law.pace.edu/dysonlecture.

Johnson previously served as General Counsel to the Department of Defense from 2009 to 2012. He was appointed Secretary of Homeland Security by Barack Obama in 2013. A former partner at Paul, Weiss in New York, he is a graduate of Morehouse College and Columbia University Law School.

“Secretary Johnson will be the first cabinet secretary to visit Pace,” says Associate Professor of Law and Nyack Resident Babara Atwell, who teaches health law at Pace and attended Columbia University Law School with Johnson. “I invited Sectary Johnson before his nomination and confirmation. I am so grateful that he managed to keep Pace on his schedule.”

The Dyson Distinguished Lecture is named for Charles H. Dyson, a 1930 graduate, trustee, and benefactor of Pace University. The annual lecture is made possible through a gift from the Dyson Foundation and aims to make available scholarly legal contributions that further Pace Law School’s educational mission.