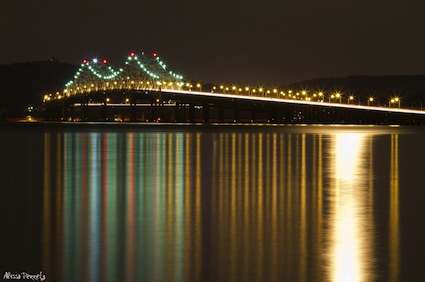 Ambivalence. True to the essence of the word, it is both blessing and curse to me. I love being compelled to write about the new Tappan Zee Bridge. But I also hate the need to do so.

As a 30 year resident of the Village of South Nyack, I have come to know this place intimately. It has touched my soul like no other. Although I have had the good fortune to be able to live almost anywhere, it is South Nyack that I have chosen to inhabit. I have sung the praises of its physical beauty everywhere. But its real strength lies in the quality and commitment of its citizenry.

I have also been critical of its shortcomings when I believed it necessary. No place on earth is paradise, and South Nyack is certainly not the exception. It is a real place to live – with real amenities and real challenges. Keeping the amenities and dealing with those challenges requires vigilance.

With that in mind, I attended last week’s South Nyack TZ Bridge Task Force meeting at Nyack College. Representing Governor Cuomo was Brian Conybeare. South Nyack was represented by Mayor Bonnie Christian. The three member SNTZBTF consisted of Connie Coker, Jerry Ilowite, and Richard Kohlhausen. About 100 very concerned citizens attending the meeting which presented preliminary ideas on how to construct the new Tappan Zee Bridge’s Shared Use Path (SUP) for pedestrians, joggers and cyclists that will stretch three miles from South Nyack to Tarrytown. There are proposed viewing areas called belvederes to take in the spectacular vistas facing to the north.

Ambivalence. I am a big walker and bike rider. I know that I will be one of the first to take advantage of the SUP when it is completed. I LOVE that. However, I also live a mere two blocks from the portal. If I am anxious to take advantage of the SUP, won’t hundreds, maybe THOUSANDS of others want to do the same? What will we do with the traffic, the parking, the garbage, the associated expenses, etc.? What will it do to privacy, particularly to the residents of the neighborhood where the path connects to the street? What will it do to property values?

This part I HATE. It’s bound to have a huge impact on those of us who live at “ground zero!” Citizen after citizen expressed their concern. One man asked, “do you have any idea how many visitors will come on a 4th of July to witness the fireworks from the center of the Hudson?” The Governor’s office has ordered a study to be conducted on other, similar venues to provide possible estimates.

The panel presented its “possible” vision of how to make the portal work where it is currently proposed. These proposals including making the portal as compatible with the existing architecture as possible, as well as relocating the South Nyack Village Hall and police station to create more places to park.

Another major concern worth mentioning is the status of NYS Thruway Exit which 10 rests on land that was once the vibrant downtown of the the Village of South Nyack. If you have exited 287 going west immediately after crossing the Tappan Zee Bridge, you will immediately drive past your exit as the road makes a large, winding inexplicable 360 degree loop over the Thruway before it merges with 9W. This issue is a particularly thorny one for the residents of the village. It is a constant reminder that, 60 years ago, the State of New York and the Thruway Authority rammed the first Tappan Zee Bridge right through the heart of the Village of South Nyack. One third of the entire village was lost, never to return.

That property, now used as a staging area for the NYS Thruway, would be a perfect location for the South Nyack SUP portal. As it isn’t currently a residential area, there is plenty of room for cars. The panel says the village is negotiating for the parcel but that it is VERY early in the negotiations. In the meantime, they were offering what they believed to be viable alternatives and eliciting community feedback.

Many residents expressed frustration with the process, citing a lack of communication on the part of both Thruway and South Nyack officials. Many also felt that final decisions had already been made and that history will repeat itself as it did 60 years ago: South Nyack once again will be left “holding the bag.”

Here’s my ambivalence: everyone who lives in the immediate area of the portal WILL BE IMPACTED. It is inevitable. We may claim this to be unfair, but progress and change is sometimes painful – until it is not. Some will never see beyond the inconvenience. Others, like me, will see it for the opportunity to take even more advantage of one of the things that makes this place so wonderful to live in; a natural beauty, second to none. And, please don’t tell me that when you have visitors from out of town, you are not going to take them for a stroll across the new Tappan Zee Bridge! Ah, yes, the ambivalence!

I was also taken aback by the vitriol with which some residents expressed their concerns. People were angry and frustrated. That can be a dangerous combination. I get it. I live here, too. However, to subject the people on the panel, who, in my mind, had obviously worked very long and hard to come up with viable alternatives is just plain rude. Passion is good. Misplaced anger is not. These people are our neighbors, as well. This is another source of ambivalence for me. I love that people are involved and participate. I hate that they do it in such a vicious manner.

It really is a case of NIMBY (Not In My Back Yard), the syndrome that plagues almost every community in every country around the world. Sure, it sounds like a great idea, but can’t you put it somewhere else? Well, in this case, as in so many others, the answer is, well, NO. But people hear what they want to hear. And, from what I saw and heard at this meeting, we have a CHANCE to make something work for us, as best we can – with a commitment to continue to improve until we get it just right!

In the meantime, I intend to see the glass as half-full. I will, indeed, be one of the first ones on the SUP when it opens. And if the village or New York State fails in their commitment, it will be once again our duty to hold them to it. This is our civic duty. We do our best to make every situation the best and, the rest of the time, remain vigilant. This has been the key to this village’s success and will remain so. This situation is no different. The world is what you make it.