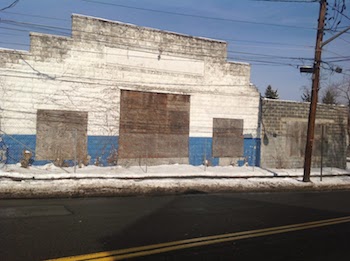 NYACK – A long-abandoned building and parking lot on Main Street described as one of about a dozen “zombie” properties in Nyack is getting new life, according to village officials.

The commercial property at 250 Main St has been described as being among the real estate living dead because it has been an unmaintained eyesore for years, but it is not a tax delinquent property that could be seized and sold off to new owners. Located at the northwest corner of Midland Avenue, this property has been tied up in the courts over allegedly illicit financial dealings.

However, Nyack Mayor Jen Laird-White said the impact of changes in the property’s status have already been seen and private companies have made offers to buy the site for development.

The property at 250 Main St. has been owned by Moses Mark Stern, a Monsey real estate developer who has been embroiled in real estate and political scandals. For years, Stern’s Nyack property has been vacant and left wide open, with gaping holes in the building on the site. The property has been cited repeatedly by the Village of Nyack for not being maintained – with the front of the building overgrown and strewn with garbage, with the same conditions in the adjoining parking lot at the corner of Main Street and Midland Avenue.

The property was tied up by a $111,115,000 court judgment obtained by Citigroup Global against Stern over controversial shopping center purchase deals that went bad. Despite the judgment, village officials said no foreclosure action had been taken previously on the property and the taxes on the site were being paid every year. However, village officials said that Citigroup Global has used a subsidiary to foreclose on the site and take title to the property.

Village officials said that with the title of the property having changed hands, previous citations against the property still have to be cleared up.

Stern, 40, a former clothing importer, gained notoriety for a 2007 shopping center deal that involved multiple properties and ended up with the massive judgment filed by CitiGroup. Stern was also the cooperating witness in the political corruption investigation that led to federal charges in New York City and in Spring Valley in 2013 against high-placed lawmakers.

In Nyack, Village Attorney Walter Sevastian said there are about a dozen “zombie” properties which the village is focusing on. He said the properties are not being kept up, but the taxes are paid – leaving little room for government action.

The properties, which include commercial buildings and private homes, are usually owned by absentee landlords or are caught up in legal disputes. Sevastian said the village has been going through a maze of legal documents to find owners and to encourage them to take action on their properties – clean them up, get them occupied or sell them.

The site at the corner of Midland Avenue and Main Street has been one of the more prominent sites. He noted that in the past few months several other zombie properties have been cleaned up or sold.

In this article:Bill Demarest, main street