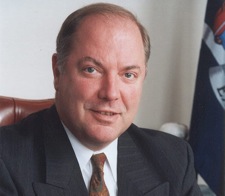 Jan 1 marked the beginning of a new year and a new era in Rockland County politics. Ed Day (R- Pomona) took the oath as Rockland greeted its first new county executive in 20 years. Like him or loathe him, Democrats and Republicans would have to agree that the county is a very different place today than in 1994. First of all there’s that whole Internet thing. And mobile phones. 9-11, two wars, among other changes in our lives. The county population has increased almost 20% since Vanderhoef took the reins of Rockland in the 1990’s.

Here’s the press release of accomplishments and achievements issued by the outgoing county executive on his last day in office.

During his tenure as county executive, Vanderhoef has transformed Rockland County government and initiated programs with far-reaching results.  Vanderhoef’s creation of the first Open Space Program resulted in the preservation of 1,200 acres of land, including three farms.

Vanderhoef also had the vision to select a piece of property along the Hudson River to transform into the first riverfront County Park.  He chose this property – the Haverstraw Bay County Park – as home to Rockland’s poignant 9-11 memorial.

Under Vanderhoef’s leadership, the infrastructure of county government has been modernized and rebuilt with eight new buildings and building extensions, including the new county courthouse and the state-of-the-art Technology Building at Rockland Community College.

Vanderhoef has championed programs to improve the lives of seniors, as well as children and families.  He worked with Legislator Harriet Cornell to establish the School of the 21st Century to enrich the lives of pre-school and school-age children.

During Vanderhoef’s first term, the county partnered with the U.S. Veterans Administration to establish an incredibly successful veterans clinic here in the County.  Before 1996, fewer than 300 veterans were using VA outpatient services because the closest VA hospital was more than an hour away.  Today, more than 6,000 veterans receive health services at the VA clinic in New City. The clinic will remain one of Vanderhoef’s most enduring legacies.

The list of accomplishments of Vanderhoef’s administration also includes:

Vanderhoef decided not to run for a sixth term last year, saying it was time for new leadership and ideas. After he leaves office, Vanderhoef will have a law office in Montebello and will be teaching at St. Thomas Aquinas College in Sparkill, NY.

In this article:politics, Rockland County