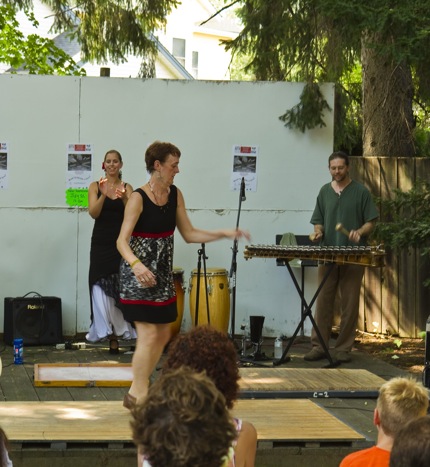 When Heather Cornell and Anna de la Paz decided to collaborate and create Walk to the Beat, a percussive music and dance project, they combined over 50 years of performance and production experience.  Now the duo is submitting their collaboration to Indiegogo, a crowd-source funding platform similar to kickstarter.  Here’s how you can support their second annual village-wide festival that is scheduled for July 26, 2014.

Cornell and de la Paz have 56 days to raise $6,695 on Indiegogo. This appeal would fund the second year of a public arts spectacle that transformed the streets of Nyack into a massive stage and dance floor. “Words like unique, super fun and full of surprises were used to describe last year’s festival,” said Cornell. “Many people said that they did not stop smiling for eight hours.” 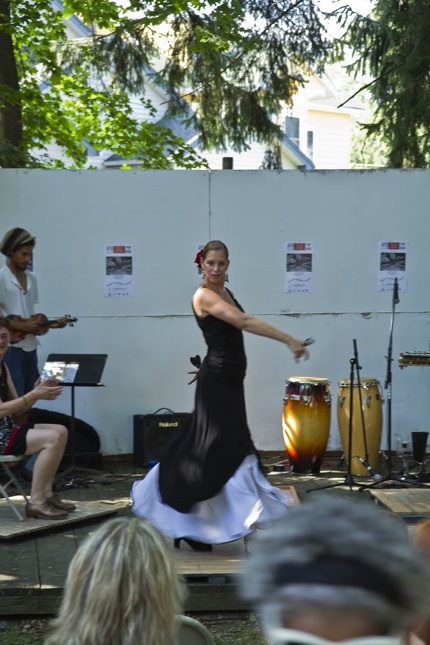 Heather Cornell, a professional tap dancer and creator of Manhattan Tap, is credited as one of a handful of dancers who started the tap dance renaissance in the 80s in New York City. For the past 30 years she’s been touring the world teaching, performing, choreographing and producing at venues like the Southbank Centre in London, England, the prestigious Salzburg Jazz Festival and New York’s Lincoln Center.

Anna de la Paz is a professional Spanish dancer who has been working for the past 20 years sharing the richness of Spanish music and dance with her community. She has taken her art and her productions to the big stages of Carnegie Hall and the Kennedy Center and to community libraries and schools.  She brings to the partnership a strong network of artists, venues and working relationships with other professionals in Rockland County. They are excited to be launching their production company in their Lower Hudson Valley home.

Walk to the Beat this and next week

Walk to the Beat will be giving workshops at the Indoor Farmers’ Market at the Nyack Center every week until March 27 from 9:30-11a. This Thurs., Jan. 30 features Brazilian Capoeira with Jennifer Salazar.

Walk to the Beat’s festival in Nyack on July 26, 2014 will fill the streets  with sound and dancing feet. They are erecting three main stages with world-class percussive music and dance acts.  An open stage invites anyone who wants to share their talents.  Spontaneous performances will “pop-up” in front of shops and restaurants, and a community-wide jam session overlooking the Hudson River will be the crescendo at the end of the day.

“Help us create a public space where music and dance connects us, makes our lives richer and fuller and can be enjoyed for free,” said de la Paz.  “But most importantly, come out on July 26.  Bring your instruments and maybe your dancing spirit, or not, and let’s play!”