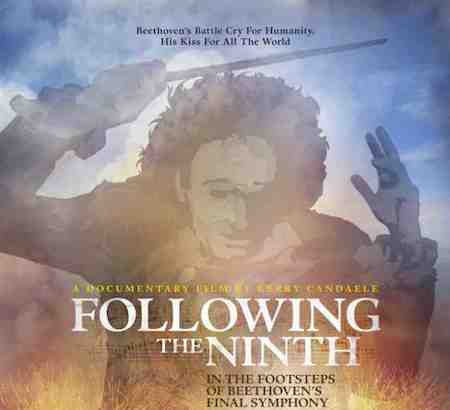 It’s an annual craze in Japan: Musicians and singers in dozens of communities join together to sing and play Beethoven’s Ninth Symphony and its “Ode to Joy.” Sometimes the participants at a single site swell to five or 10,000. That won’t quite be duplicated this Wednesday at 7:30p in the Nyack Center, but this celebration of the New Year, with Beethoven front and center, aims for the same inspiring effect.

I am co-producer of the new documentary, “Following the Ninth,” which will be screened that night by the Rivertown Film Society–with live music before and after, a discussion hosted by Elliott Forrest of WQXR, and a very special surprise.

The film, directed by Kerry Candaele, has drawn raves from The New York Times and other outlets, and Bill Moyers recently devoted a full segment to the film on his PBS program.

“Following The Ninth” explores the amazing cultural and political influence of Beethoven’s Ninth Symphony around the world, from Japan to Chile (during the Pinochet years) to China (at the Tiananmen Square protests), to Berlin (where Leonard Bernstein conducted an epic concert to mark the fall of The Wall), plus folk-rocker Billy Bragg and his new version of the “Ode to Joy.” I’ve also co-authored a book with Candaele, titled “Journeys With Beethoven.”

The “Ode to Joy” remains a rallying cry for freedom and brotherhood/sisterhood around the world. Just last month, for example, it was sung by thousands at the start of the wave of protests in the Ukraine. A new phenomenon of “flash mobs” playing and singing the “Ode” — from Spain to Hong Kong to Austin, Texas — has produced numerous popular videos at YouTube.

Our celebration on Wednesday will kick off at 7:30p with pianist Yashar Yaslowitz playing a little Beethoven. He is director of the popular Carnegie Room series at Nyack Library and will be performing Beethoven sonatas at the library, on four Saturdays, starting January 11. (I will be providing some multimedia clips and commentary at each one).

Then we’ll screen “Following the Ninth,” followed by my chat with Elliott Forrest–and a special don’t-miss performance by local musicians and singers (special thanks to Arlene Keiser and Rob Keiser).

For tickets info visit RivertownFilm.org where you can also read more and view the trailer for this film.