The “Lincoln Boulder” has been in front of the Nyack Library for 105 years. A brochure from the June 13, 1908 dedication ceremony was subtitled, “An inspiration to the living, a tribute to the dead.”

150 years ago this week, the President of The United States dedicated a new cemetery stating, “the world will little note nor long remember what we say here” as part of one of the most famous speeches in American history. Although that quote sounds ironic when you consider how often the Gettysburg Address has been memorized by school children and cited by scholars, in the short run Lincoln’s words were prophetic: the speech received little attention in many of the major newspapers of the day. The Rockland County newspapers of 1863 gave this legendary speech only a small paragraph in a slim article describing the new cemetery.

Unable to call back the heroic dead to life, grieving over the loss of lives precious to their country, there was left the opportunity alone to gather up their honored dust with reverent care, and to bestow it where in all time to come the devotee to Free Government, the admirer of heroic courage might stand uncovered in the very presence of the honored dead, to breathe new aspirations for the welfare of his country, grateful orisons for the repose of the noble band who there died in its defence. Every way fitting then was it that the Chief Magistrate of the great Republic should with it his advisers, his aids high in official station, manifest as it were the Nation’s feeling of interest in the proceedings; and as these appropriate ceremonials rose in power and interest-as victory and triumph were fain to be remembered in the midst even of so much that was sad in the fearful losses sustained, the occasion yet became all but grandly triumphal in its character as the vast assemblage was made to feel that on that mighty battle-field, with all its sacrifices the country was saved.

Gary Wills, author Lincoln at Gettysburg: the Words that Remade America, argues that Lincoln’s aim at Gettysburg was to win the Civil War in ideological terms by redefining the meaning of the Constitution and founding principles of the nation.   It is a remarkable fact of American politcal culture that we continually hearken back to our founders principles: Four score and seven years ago our fathers brought forth on this continent, a new nation, conceived in Liberty, and dedicated to the proposition that all men are created equal.

Back in Rockland County, the editor of the Rockland County Journal was “Looking Backward and Forward” too. Successful statewide elections for many Republican candidates (Yes, Lincoln was the first Republican President) had the editor blasting local Democrats who maintained power in the county.   He declared: “the day is near at hand when the demagogues and factionists of even Rockland county will be beaten, crushed out, and remembered only because of the intense scorn they have merited and won.” 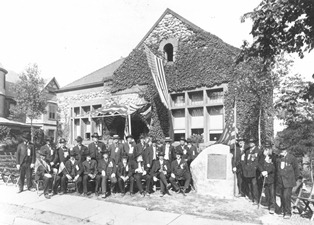 On June 13, 1908, the Lincoln Memorial Boulder was unveiled in front of the Nyack Library. The children of Nyack raised money for the plaque, which has the Gettysburg Address on it. Seated and standing around the boulder are two dozen elderly men, many wearing Civil War hats. All were members of the Waldron Post, G. A. R. and had wanted a remembrance for their comrades.

On a more personal level, many local soldiers lost their lives at Gettysburg,  the obituaries, sermons, and memorializing remarks to those lost show how tragic the Civil War was to many families.  On August 15 of 1863 the Journal reported on the death of a Lieutenant S.A. Miller eulogizing him by saying “The war has claimed no nobler victim, nor brought low a more shining mark than this gallant soldier of freedom. His memory will be forever embalmed in the grateful remembrance of the nation for which he died.”

In 1908 the local Waldron Post of the Grand Army of the Republic dedicated “The Lincoln Boulder” with Lincoln’s immortal Gettysburg Address inscribed on the side.  Howard Van Buren, President of the Nyack Library Board of Trustees said upon the dedication of the boulder:

We have assembled to-day to offer tribute of honor and respect to the words spoken by Abraham Lincoln on that historic and solemn occasion, the consecration of the battlefield of Gettysburg to the Federal dead. These memorable words, coming straight from his deep heart of pity and love, breathe the loftiest ideals of civic virtue and patriotism. Measured by the most exacting standards, they are a model of prose composition and a marvel of compressed thought, and are justly valued as one of the world’s great classics – a masterpiece, whose sublimity of thought is equaled only by the simplicity of the language.

Indeed, his words endure in Nyack, across America and the world.

Local Coverage from the week after the Gettysburg Dedication

Obituaries and articles related to local Soldier’s deaths at Gettysburg: