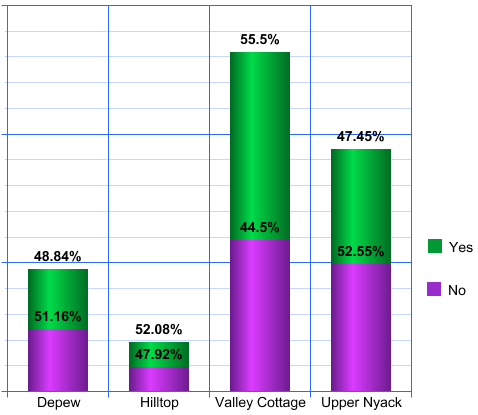 A strong turnout in Valley Cottage provided the difference to pass a $26.4 million bond referendum in the Nyack School District on Oct 29, 2013.

Nyack School District voters narrowly approved a $26.4 million dollar bond referendum on Tuesday night by 51.6 to 48.4 percent to fund infrastructure improvements and technology upgrades. About one third of the bond will be used to upgrade athletic facilities including installation of an artificial turf field at Nyack High School.

The vote was a vindication for supporters of fake grass, who campaigned vigorously for this year’s vote after a 61-39% defeat of a similar but smaller ($16.5 million) bond referendum in 2007.

It was an election where every vote truly counted: only 94 votes (3 percent) separated the winning Yes votes from the No votes. Voter turnout was about 1/3 higher in 2013 than in 2007 with 958 more people voting this year than during the initial effort to install artificial turf fields. A little less than 1 in 5 registered voters (19.4%) turned out for the school bond vote — which represents a much higher rate of participation than typical school board elections held each Spring.

The 2007 bond referendum was turned down by voters in every voting district including Valley Cottage where 63% of the voters gave the proposition a thumbs down. Voter participation in VC increased by 46% between 2007 and 2013 with 1317 ballots cast on Tuesday compared to only 901 seven years ago.

A contentious debate in social media — a medium that effectively didn’t exist in 2007 — accompanied the vote, mostly over the merits of artificial turf. Despite the focus on fake grass, about two-thirds of the bond will be dedicated to repairing roofs, boilers and other school infrastructure.