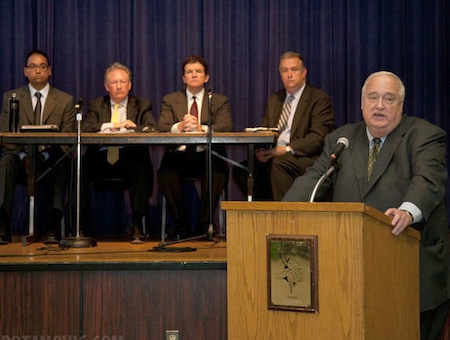 Elected officials and candidates overwhelmingly urged the PSC not to rush into building an expensive and possibly unnecessary desalination plant. Rockland County Legislature Chairwoman Harriet Cornell and Assemblywoman Ellen Jaffee both said that the decreased demand for water below previous projections means there is plenty of time for Rockland to put a water management plan in place.

United Water opened the hearings on both nights presenting the case for why Rockland County needs more water in the future. The Rockland Water Coalition, which opposes construction of the plant because of its high cost and detrimental impact on the environment, spoke next saying that less expensive and safer options exist which can also increase the water supply. Industry experts, hired by the hired by the Rockland Water Coalition, also presented their analysis of United Water’s proposed project. The public was also given time to ask questions and provide comments.

On Wednesday, Professor Albert Appleton spoke on behalf of the Rockland Water Coalition. During the 1990s when he served as Commissioner of the New York City Department of Environmental Protection, Appleton rejected a similar desalination proposal and saved the city $5 billion through conservation, increased efficiency, leaky infrastructure repair and protection of the NYC watershed.

Based on his experience as a water consultant with clients around the world, Appleton says three simple steps could increase water resources for Rockland residents at a fraction of the cost of building a desalination plant. Better management of the Lake DeForest Reservoir coupled with conservation and fixing leaking water mains would save more water than a new desalination plant would create, he says.

Appleton countered United Water’s claim that businesses would not come to Rockland unless there was a dependable supply of water. In fact, Appleton says businesses are more likely to look at water rates which would be double or more the rates of surrounding counties and decide to locate elsewhere.

He explained that not only has water demand been decreasing nationwide over the past three decades despite population increases, but that when water rates skyrocket, residents cut their use of water, which also brings down demand. In some communities where desalination plants have been built, demand has fallen so much that the additional capacity provided by desalination is never tapped with ratepayers still having to pay for the construction costs while the plants sit idle.

What you can do to help

The PSC will be accepting comments  until Nov. 8 via telephone, internet or mail. It is extremely important that public continue to express its views in writing to the PSC and NYS Governor Andrew Cuomo. Even if you are not an expert, you may provide your opinion about whether Rockland needs more water and you may ask the PSC questions that you feel they should consider in making their determination of need. Short comments are fine.
Comments must be submitted to the PSC by Nov. 8 via email, snail mail, or telephone.

In your comments, please refer to Case 13-W-0303-Proceeding on Motion of the Commission to Examine United Water New York, Inc.’s Development of a New Long-Term Water Supply Source.

Gale Pisha is a member of the Rockland Water Coalition.