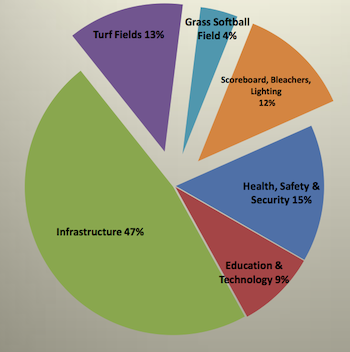 Categories of Capital Improvements in the Nyack Schools Bond referendum. Voters go to the polls on Tues Oct 29.

I had the honor of running for the Nyack School Board in 2010 and learned a great deal about the challenges this district faces. I do not envy the job that those elected  have had to  face with the budget challenges of the last four years.  I have been a vocal advocate against the 2% cap and have pushed for increased spending in certain areas during these difficult times. So it breaks my heart to state that after careful review I will vote no and encourage my neighbors to vote no on this bond referendum.

Don Hammond and Michael Lagana have published articles indicating their strong support for the bond. They have both served with distinction on the Board of Education spanning the last decade and a half of this districts development. They raise some very good points in the article so lets start with what we can agree on. It is an excellent time to borrow money and the matching state funds should be harvested. Spending the five million now on capital improvements would result in about $1.6 million in matching state funds. Bryan Burrell has suggested a more modest program that includes these same elements. We should do it. It is a good time to borrow money but based upon the districts budget plan most of the borrowed funds will be borrowed from 2016 through 2020.  They are doing this because the large bond commitment does not retire until 2016.  There is no assurance that interest rates will sustain their historic lows that far out. They have priced this out at 4.5% interest which gives them some buffer but if interest rates exceed that number it will increase the tax levy significantly.

Nyack Schools are asking voters to approve a $26.4M Bond Referendum on Tues Oct 29, 2013. Polls will be open from 7a-9p. To find out where you should vote, visit NyackSchools.org.

If approved, monies will be used to repair infrastructure such as roofs and boilers; upgrade technology; and install artificial turf at Nyack High School. Because new bonds will replace bonds that are being retired, school officials say there will be minimal tax payer impact if the bond is approved.

Second they make a compelling car lease metaphor that we are just swapping a car lease payment and getting a new car so their will be no change in the tax levy. This is more like the household that having charged their credit cards to the max and having finally paid them off,  goes out and charges them to the max again. That monthly payment is still coming out of the taxpayers pocket.  By reducing the debt load  significantly  we give the district greater flexibility in its budget process going forward. Something it has not had since 2010. What I do not think is being recognized here is that over the last four years this district has cut staff, jettisoned programs, cutback on out of district expenditures for special needs students. It has been a valiant effort to sustain fiscal discipline while maintaining a high level of academic performance. All in all they have done a pretty good job, but it has induced a fair amount of disruption in the classroom product that needs to be undone when we get a little breathing room in the annual budget process. My fear is these disruptions will now become the new normal. We are talking classroom sizes, number of teaching assistants, technical support, curriculum support. To go right back out and charge the credit card back up to its limit removes the potential to getting back to an annual budget process that is less about barely meeting minimum standards to a progressive budget that creates an environment for teaching and learning that aspires to the highest standard possible.

Third, budgets are the fingerprints of a strategy. And what this budget reveals once you get past the capital improvement expenditures is a strategy that emphasizes Athletics over Academics. I think that strategy is fundamentally out of step with what the district really needs. Which is  smaller class sizes, more resource support and a state of the art Network and Technology Infrastructure that supports and drives curriculum. The money being allocated for that technology effort reflects a modest effort at rewiring not rethinking our Digital Curriculum Strategy. An essential aspect of what great schools will be mastering in the next five years. That is where we should be focusing our resources.

I am voting against it not because I do not want to do more for the district but because I think we can do better. This  bond reflects a lot of hard work and wonderful aspirations that all of us share for the district.  If it is defeated I hope that all of us can come together sharpen our pencils and fashion an alternative that is more in step with our academic needs, reduces the overall long term debt risk and opens the budget process so we can be more flexible going forward meeting our immediate and long term needs.