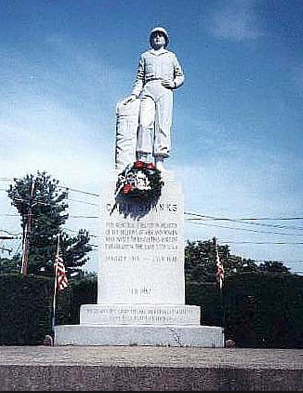 Jerry Donnellan, Nyack native and a wounded Vietnam War Veteran, will present Camp Shanks, First Stop on the Road to Victory In Europe on October 16 and 17 as part of the John Scott Armchair Walking Tour series presented by The Historical Society of The Nyacks and Friends of the Nyacks.

Donellan is currently Rockland County Commissioner of Veterans Affairs and Curator at the Camp Shanks Museum in Orangeburg.

In September of 1942, the U.S. Army took over 2,000 acres of Orangeburg farm land and New York State property to create a huge Port of Embarkation to support the war in Europe. Over 1.3 million GIs were processed at this “last stop USA,” on their way to Victory in Europe. After the war, Camp Shanks served to process the returning and victorious men on their way home. Many veterans chose to remain in the area at Shanks Village, with their wives and children, to study at near-by colleges and universities. Many of these veterans with their new degrees and families decided to remain in Rockland and built the Hickory Hill Cooperative in Tappan.

Seating is limited and attendees should pre-register by calling or going on-line.