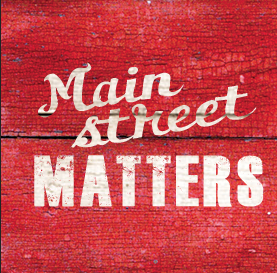 Benjamin Moore executives are coming to Nyack and they are bringing a big bucket of paint with them. Literally.

Nyack will receive a free Main Street makeover as one of 20 communities that were selected by Benjamin Moore as a winner in its online Paint Street Matters contest last Spring. About 18-20 businesses on Main Street between Broadway and Cedar Street will get a first floor preening courtesy of the paint company headquartered in Montvale, NJ. Benjamin Moore CEO Bob Merritt will join Nyack Mayor Jen White at the Veteran’s Park Gazebo on Monday morning for a kick off press conference followed by the first ceremonial brush stroke applied to the facade of Koblin’s Pharmacy across the street.

Spilotras Painting of Chestnut Ridge, NY has been hired by Benjamin Moore to be the prime contractor for Nyack’s Main Street Matters project. The project is scheduled to be completed by October 4.

Where required, Benjamin Moore will pay for additional TLC for the selected storefronts. “We didn’t want to come to town, slap on a coat of paint and say farewell,” says Kendyl Wright, Experiential Marketing Manager at Benjamin Moore. “We wanted to do something that would really help sustain the downtown.” Wright says Benjamin Moore will hire people to power wash, restore trim and replace tiles for some businesses.

As part of the press event, Benjamin Moore will bring a giant photo worthy can of paint to the village on Monday morning. George Oliphant from WNBC-TV’s “George To The Rescue” DIY segment will also be in Nyack to cover the progress of the village’s makeover during the project.

The site of the press event, Veteran’s Park on Main Street, will also get a fresh coat of paint for the gazebo and park benches as well as some replacement trees.

Businesses that aren’t included in area of Main Street that mattered to Benjamin Moore can still get help sprucing up. Voucher coupons, good for 10 free gallons of paint, will be distributed by Nyack officials to businesses after the paint company finalizes details of this distribution.

Many of the nominated communities seized the opportunity to get a free paint job, running grass roots “get out the vote” campaigns for their downtowns.  “As a resident of Nyack I took a personal interest by handing out flyers and placing them around town,” says Dana DiTrani, who recently moved to Nyack and took up the challenge of raising public awareness for the project. “When completed. it will feel like a new beginning for our well deserved Main Street. It is very exciting to learn that the Benjamin Moore Project is coming to fruition so quickly!!” she said.

The village is the first of the 20 winners across the country and in Canada where Benjamin Moore is rolling out Main Street Matters. A downtown outdoor party in Nyack is planned for Sunday October 6 to celebrate the conclusion of the project.

Editor’s note: The scheduled 9/16 press conference described in this article was postponed and rescheduled for Wed, Sept 16.