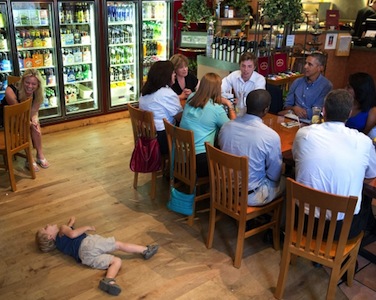 President Barack Obama, with Education Secretary Arne Duncan, talks with college students, recent graduates and educators at Magnolia’s Deli & Café, as a child plays on the floor, in Rochester, N.Y., Aug. 22, 2013. The President stopped at the restaurant during his college affordability bus tour. (Official White House Photo by Pete Souza)

I go through colleges like Egypt goes through leaders.  This September I’ll be spending a semester abroad at my third school in as many years.  Though unorthodox, my college experience has been unbelievably rewarding.  I’ve met a lot of incredible, interesting people; I’ve become more comfortable venturing outside of my comfort zone; and, I’ve taken some outlook-altering courses. While I love college, a lot of practices that have become universal at universities across the country make me sicker than a pledge during initiation.  Big change in the college landscape has long felt inevitable.

So I had more than passing interest to hear what President Obama had to say about the unsustainability of American higher education last week while visiting schools in Upstate New York and Pennsylvania.

The plan that President Obama is promoting  is two-fold.  The first part, which won’t require congressional approval, involves the creation of a new federal ratings guide.  The ratings guide will provide parents and students with more information about schools.  The ratings will take into consideration colleges’ value, with the purpose of incentivizing schools to control costs.  Step two is passing a bill in congress to link financial aid to the new ratings.

Overall, the plan seemed sound.  More information is always good.  Plus, tuition costs nationwide are out of control; if a new ratings system could motivate schools to lower costs, that can’t be a bad thing.  Not surprisingly, however, Republicans were not so enthusiastic about the proposed legislation.

“I’m strongly opposed to his plan to impose new federal standards on higher education institutions,” said Florida Senator Marco Rubio.  “This is a slippery slope, and one that ends with the private sector inevitably giving up more of its freedom to innovate and take risks. The U.S. did not create the best higher education system in the world by using standards set by Washington bureaucrats.”

Jane Wellman, the executive director of the National Association of System Heads, also expressed concerns with the potential of the government getting involved in higher education: “The federal government has never been in higher education policy before — it has just administered financial aid — and I’m not sure you can just take that role and stretch it like a rubber band.”

Others, such as Ezra Klein of the Washington Post, raised questions concerning the details of the proposal. “The problem with this plan is the problem that bedevils all pay-for-performance schemes: how do you define ‘performance’?” wondered Klein.  “Is it raw graduation rates? If so, how do you account for colleges that sign up more disadvantaged kids? Is it post-college salaries? Then how do you account for colleges that send kids into teaching rather than Wall Street?”

I understand both the macro and micro-level concerns levied against Obama’s plan.  These days it’s hard to trust the federal government to do anything competently.  When I asked friends about Obama’s proposals they expressed ambivalence.  In their minds, education reform took the backseat to outrage at the injustice of a 35-year sentence for Chelsea Manning and the recent nine hour airport detention of Glenn Greenwald’s partner, David Miranda.  If the Department of Education is unable to find adequate solutions to Mr. Klein’s semantic concerns, the quality of higher education could conceivably deteriorate and Mr. Rubio and Ms. Wellman’s fears of federal involvement would prove to be justified.

However, if done correctly (a big IF), I think that federal incentives could encourage rather than discourage innovation and risk taking.  In fact, the unregulated free market often incentivizes against real educational innovation in favor of established ways of siphoning money out of the hands of students and parents.  For instance, if you’ve ever stepped foot on a college campus, chances are that you’ve noticed construction being done.  Colleges constantly refurbish old buildings and erect new ones because it’s profitable.  They are able to fund the construction at the hands of students and/or tax payers while simultaneously increasing their school’s prestige. This past year the bulk of my classes were in two buildings: the old rickety humanities building and the brand new business school.  Would I rather take classes in the sleek business school?  Of course.  But the building I took classes in had virtually no effect on how much I learned.

Construction of often-unnecessary new buildings is emblematic of the reasons that college tuition costs are rising at a much greater rate than learning.  However, greed and corruption have pervaded many aspects of higher learning on campuses across the country.  It’s the reason that textbook manufacturers regularly churn out new editions of textbooks that differ only slightly from the previous one.  And don’t get me started on the N.C.A.A., whose monopoly on minor league football and basketball allows them to exploit ‘student’ athletes and demonize the few who seek small compensation for their work.  Colleges are in the business of making money and because there is no viable alternative for students who want to earn a decent living, they are able to hike prices with little effect on demand.

That is, there was no viable alternative.  During his speech at the University of Buffalo, President Obama highlighted schools that use technology to help students earn degrees faster and cheaper. Central Missouri University has “partnered with local high schools and community colleges so that their students can show up at college and graduate in half the time because they’re already starting to get college credits while they’re in high school or while they’re in a two-year college,” he said.

“Universities like Carnegie Mellon, Arizona State — they’re starting to show that online learning can help students master the same material in less time and often at lower cost,” said Obama. “Georgia Tech, which is a national leader in computer science, just announced it will begin offering an online master’s degree in computer science at a fraction of the cost of a traditional class, but it’s just as rigorous and it’s producing engineers who are just as good.”

The traditional four-year degree at the school of your dreams will soon be a thing of the past for most students whose parents aren’t rich.  And that’s not entirely a bad thing.  For instance, there’s no longer any reason that 200-student introductory lecture halls should exist.  These courses are by-and-large taught by tenured professors who are much more concerned with their research than their disinterested PSYCH 101 students.  I stopped attending a lot of these sorts of classes because I found it was a waste of time: I was able to learn more efficiently – with no detrimental effects on my grades – if I skipped class and studied the textbook.  Online courses can and should replace intro courses.

In the end, colleges that do not find ways to lower costs will lose out to the increasing number of educational alternatives and the schools that are working in tandem with these technological advances.  These schools will likely be forced to go out of business – or God forbid, be bailed out.  And if you’re an alumni of one of these schools, that is a terrifying notion.  So, if a new college rating system and revamped criteria for financial aid can incentivize schools to become more affordable, I think it’s hard not to support the president’s plan – or, at least his intention.

However, while I think that a lot of aspects of higher education should be made more affordable and more efficient, the potential for an eventual complete overhaul is sad.  The more time we spend pajama-clad, taking classes on the Internet, the less time we spend interacting with other students, being exposed to new points of view, and learning about ourselves.  College tour guides are being sincere when they show you how beautiful their campuses are and rave about how they were inspired by a given professor.  That’s the stuff that makes college such a romantic concept for kids and such a nostalgic notion for adults; it’s just not worth the current price.

So if President Obama really wants to save American higher education and make it affordable for everyone, he’ll do something he hinted at in his speech.  With regards to cutting funding on higher education, he said “the fact is that we’ve been spending more money on prisons, less money on college.”  In New York, we’re spending approximately $40,000 less per student than per prisoner.  Here’s a novel idea that nobody my age is talking about, LEGALIZE MARIJUANA!  Pot legalization could save the United States $13.7 billion per year.  And if that money went towards education, less people would be unemployed and reduced to illegally selling marijuana to support themselves.  In fact, legalizing drugs would also serve as real affirmative action.

Contrary to people like Matt Taibbi, of Rolling Stone, who’ve insinuated that Obama’s bus tour might be a convenient distraction from the intelligence debate, I think Obama’s plan is part of a well-intentioned back-to-school platform.  And despite what some Republicans would claim, I think there’s little downside to incentivizing college affordability.  However, while I’ve heard President Obama’s personal story about how he was able to get through his ivy league education with the help of loans and scholarships so many times that I practically know it by heart, I’ve oddly never heard him explain how he might not have gotten to go to college at all had he been arrested for smoking dope in high school.  If Obama truly wants to put more people in college – and less in jail – he should think higher than a new ratings guide.