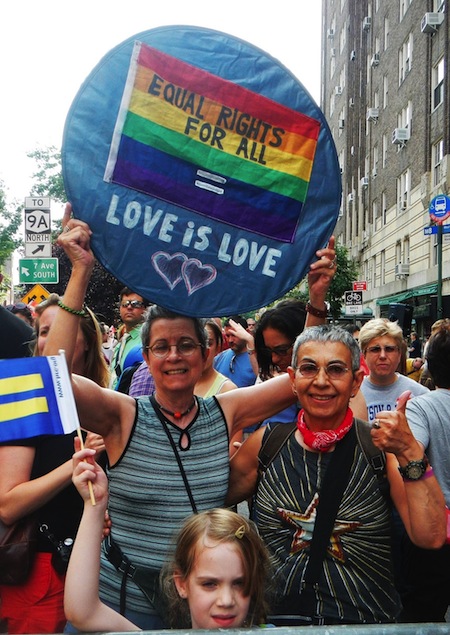 The Supreme Court paved the way for real change – and most certainly for the better — when it essentially struck down the Defense of Marriage Act (DOMA) last month. Should they decide to marry, gay couples will now be afforded, UNDER THE LAW, the same rights and protections as heterosexual married couples (I often tease by saying married gay couples are as entitled to be as miserable as heterosexual ones!). I am not a lawyer, and forgive the oversimplification, but, to me, this is not an issue about marriage, or sex, or tradition. It is one of FREEDOM. The freedom to be whom you choose to be AND to be WITH. Should have NEVER been any other way in a truly FREE society. It may be a shame that it took this long, but, be that as it may, it is here now.

It was, once again, a privilege to be assigned to cover this historic story. I spent nearly four hours at the epicenter of the gay-rights movement, The Stonewall Inn in Greenwich Village, NYC. Thousands of revelers on the streets in front of the Inn listened to speaker after speaker speak with joy at the liberation this would mean for themselves and their community. I felt the energy and it moved me. I could see the relief and release in their ear to ear smiles. THIS is what America should be, and IS, about!!

The June 26, 2013 Supreme Court decision was not about marriage, or, in the final analysis, even love. It was about freedom – freedom to be who you are, love as you choose, and EQUALITY UNDER LAW..