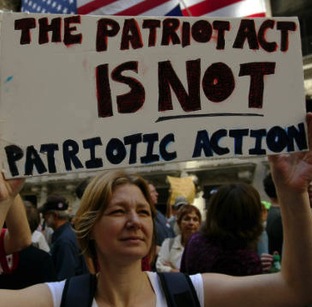 In the months following the October 2001, passage of the Patriot Act, there was a heated public debate about the very provision of the law that we now know the government is using to vacuum up phone records of American citizens on a massive scale.

“A chilling intrusion” declared one op-ed in the Baltimore Sun.

But the consternation didn’t focus on anything like the mass collection of phone records.

Instead, the debate centered on something else: library records.

Salon ran a picture of a virtual Uncle Sam gazing at a startled library patron under the headline, “He knows what you’ve been checking out.” In one of many similar stories, the San Francisco Chronicle warned, “FBI checking out Americans’ reading habits.”

The concern stemmed from the Patriot Act’s Section 215, which, in the case of a terrorism investigation, allows the FBI to ask a secret court to order production of “any tangible things” from a third party like a person or business. The law said this could include records, papers, documents, or books.

Civil liberties groups and librarians’ associations, which have long been fiercely protective of reader privacy, quickly raised fears of the FBI using that authority to snoop on circulation records.

The section even became known as the “library provision.”

Yet as the Guardian and others revealed this month, the government has invoked the same provision to collect metadata on phone traffic of the majority of all Americans — a far larger intrusion than anything civil libertarians warned about in their initial response.

“A person might uncharitably think of us as lacking in imagination,” says Lee Tien, a longtime attorney with the Electronic Frontier Foundation.

In a speech before casting the sole dissenting vote in the Senate against the Patriot Act, Sen. Russ Feingold did zero in on Section 215 as “an enormous expansion of authority” with “minimal judicial supervision.”

The disclosures about the NSA collecting information from cell phone carriers has introduced a new word to anyone who isn’t a database administrator. OK, so what is metadata?

Unfortunately, the Wikipedia definition for metadata, (it’s “data about data”) isn’t going to help most people understand what this means or make them feel any more secure.

The easiest way to think about metadata is to remember the old card catalog that existed before libraries were computerized. If you skimmed the card catalog you could get a lot of useful information about a book but it wasn’t the book itself. Also, you didn’t get any information on when the book was last checked out and who had checked it out, either.

The metadata which the NSA has been collecting on cell phone calls is reportedly limited to the originating phone number, the receiving phone number and the duration of the call. This data can’t be used to listen to past calls — but it can be used to decide to listen in on future calls. Which, at least theoretically, still need to be approved by the secret FISA court.

But even Feingold did not conceive of the provision being used for bulk data collection, merely mentioning the possibility of individualized cases — for example, compelling “a library to release circulation records.”

Civil liberties advocates said in interviews there is a simple reason for the disconnect: In the period immediately after the Patriot Act passed, few if any observers believed Section 215 could authorize any kind of ongoing, large-scale collection of phone data.

They argue that only a radical and incorrect interpretation of the law allows the mass surveillance program the NSA has erected on the foundation of Section 215. The ACLU contends in a lawsuit filed last week that Section 215 does not legitimately authorize the metadata program.

The reason libraries became a focal point, Tien says, is that, “People could see that those kinds of records were very seriously connected to First Amendment activity and the librarians were going to war on it.”

Even before the Patriot Act passed, the American Library Association warned members of Congress that the business records provision under consideration would “eviscerate long-standing state laws and place the confidentiality of all library users at risk.”

“The library groups have a very well-informed and active lobby,” says Elizabeth Goiten, who co-directs the Brennan Center’s Liberty and National Security Program.

So has the government ever used Section 215 to get library records? We don’t know.

Testifying before Congress in March 2011, a Justice Department official said Section 215 “has never been used against a library to obtain circulation records.”

But as with so much else about the Patriot Act, how often or even whether the government has obtained library records is secret. Section 215 imposes a gag order on people or businesses who are compelled to produce records.

The FBI has also used a separate Patriot Act provision, issuing what is known as a national security letter, to seek library patron records. One such episode prompted a successful court challenge by Connecticut librarians in 2005-06.

The government itself didn’t get around to using Section 215 to vacuum up phone metadata until five years after the Patriot Act passed, in 2006, according to a new Washington Post report. The government had been sweeping up metadata since after 9/11 but apparently was doing so without a court order.

USA Today revealed that warrantless surveillance in 2006.  Around the same time, according to the Post, the telecoms asked the NSA to get a court order for the data, believing that it would offer them more protection.

On May 24, 2006 two weeks after the USA Today report, the secret Foreign Intelligence Surveillance Court decided to redefine relevant business records under Section 215 “as the entirety of a telephone company’s call database,” according to the Post.

Kate Martin, director of the Center for National Security Studies, says that she has for years worried about bulk collection of metadata, but believed the government might be justifying it using other provisions in the Patriot Act.

“It was a really novel idea on the part of the government that they could use 215 to get bulk phone records,” she says.

As part of the Patriot Act reauthorization of 2006, Congress changed some of the wording in Section 215. But because the government’s interpretation of the law is still secret, it’s not clear whether the changes made any difference in the court’s ultimate authorization of the metadata program.

Justin Elliott has been a reporter with ProPublica since 2012, covering politics with a focus on money and influence. He was previously a reporter at Salon.com and TPMmuckraker and news editor at Talking Points Memo. He was also a fact-checker at Mother Jones.