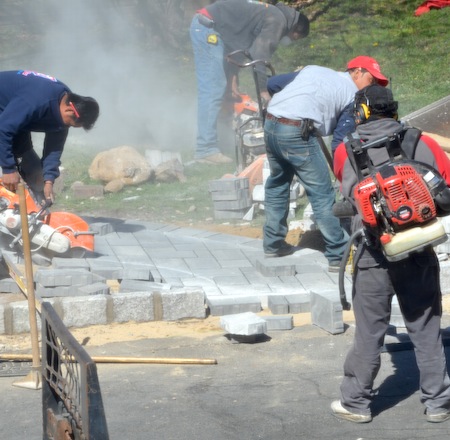 Nyack, June 29 — Wish those landscapers would stop using those noisy, gas-powered leaf blowers?  Don’t hold your breath — unless you’re concerned about the pollutants that leaf blowers expel into the air.  At Thursday night’s village hall meeting, a discussion about limiting the use of leaf blowers produced a heated and animated discussion.

The majority of speakers at the meeting strongly opposed the use of gas-powered leaf blowers saying they are a source of noise and air pollution. “Dust, pollen, herbicides, pesticides, lawn fertilizer, feces and all matter of debris that are blown into the air for us to breathe,” says Nyack resident Henry Rand.

Beth Riso, who has been combating leaf blowers for the past three years spoke on behalf of a local group who proposed banning leaf blowers after the leaves are down and after Spring clean up is over. By prohibiting their use in the village between Dec. 16 to March 1 and April 15 to Sept. 14, Riso believes the village can strike a fair balance.

However, leaf blowers have their fans, too. “Residential clean-ups are mostly unaffected by any winter leaf-blower curtailments,” says Jay Cohen, a representative of the Active Landscapers Association.   Cohen claims “the biggest issue is full enforcement.”  If the village took action to enforce a noise ordinance, it would be harder to enforce the legislation on undocumented and out-of-town landscaping crews than for local, authorized companies.  Illicit landscaping companies’ ability to skirt the town’s leaf-blowing regulations would give them a competitive advantage over local rule-abiding companies.  Additionally, because the leaf blower opponents were not targeting other loud, environmentally unfriendly machinery, such as jackhammers, Cohen felt that “our industry is made to be a scapegoat.”

Nyack resident John Carlio wasn’t buying the leaf blower ban either, calling the new restrictions draconian. “I am opposed to the regulations in the form that they are being proposed tonight,” he said.   Carlio argued that the measures would be a hindrance to disabled people who cannot rake or work with their hands.

As tension in Village Hall escalated, Mayor Jen White reminded everyone that nothing official has been decided.  She acknowledged that the proposed regulations would raise taxes. “It would be more expensive to clean memorial park with rakes than with leaf blowers.”  White proposed a community-sponsored public outreach campaign, in which residents of Nyack would be educated about the negative implications of using gas-powered leaf blowers.

Instead, with finality and a bit of exasperation Mayor White tabled the debate, saying “I think we need to set up a committee.”

Max Cea is a contributing editor at NyackNewsAndViews and a Junior at the College of William & Mary.