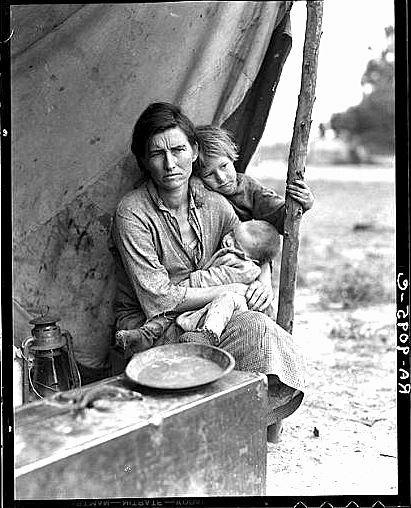 So many people have seen the iconic Great Depression-era image of “Migrant Mother,” the 32-year-old woman with seven children photographed by the famed Dorothea Lange at a California itinerant crop pickers camp. As do the equally stirring New York City breadline images, “Migrant Mother” captures a nation down on its people’s luck but with the dignity of the individual intact. Photographs of endurance in the economic calamity are in the history books and now online, and there are some private collections that travel about. The Edward Hopper House Art Center in Nyack is currently hosting a Lange installation as well as “The Lange Sidebar — The Documentary Continues: Women in Social Issues Photography.” The second exhibit is the work of seven contemporary women, from their teens into the retirement years.

It matters not whether Lange’s now iconic images of Great Depression America, or Jacob Riis’ glass negatives of New York City tenement life or the contemporary and recent photographs of humanity taken by the seven women in The Lange Sidebar were captured in different decades, even centuries, by people of varied background, outlook and beliefs. Nor is the technology important, from large, slow tripod cameras to Speed Graphic press units to 35mm to today’s digital. All this social documentary work, no matter the time, place or equipment, has had one goal: to report with camera, to document as honestly as possible the who, what, when, where, why and how, those cardinal building blocks of journalism, of information.

As with Dorothea Lange and Jacob Riis, the Lange Sidebar photographers have tried not to put their beliefs and biases into the picture — literally, no matter how strongly they feel, as surely Lange did in the Great Depression. Nor are they calling us, the viewer, to make judgments about their subjects. Certainly we are not to pity; empathize, yes, perhaps; take an image or two or three as a call to personal or government or societal action, maybe; understand, of course. But never to view social documentary subjects as in a museum. They are humanity, as are we, and all of us — our faces, our homes, our circumstances — tell stories or parts of them. The social documentary photographer tries to capture that.

The Great Depression images Dorothea Lange took were “job” photos, on assignment from the Farm Security Administration. In 1942, she was under contract with the War Relocation Authority, documenting the forced removal of people of Japanese ancestry to camps. As a former newspaper photographer, I know how Lange felt and how she operated. All news photographers, and that includes documentary lens people since there is “news” in their work, don’t usually get too overwhelmed by the assignment as one shoot after another happens. Jobs become routine, even if exciting. Celebrities seem not that; people suffering move you, of course, as does tragedy, but the assignment must be completed, done as best as possible, and then you try to move on. Actually, you must move on, if you want to keep doing your job. The job is in the moment, and you are not thinking about commenting on anything or how your effort will be viewed and analyzed, perhaps years later.

Reporters observe and take notes, later writing their stories. Photographers look through the viewfinder and click away, refining the rawness of their effort in the darkroom — the wet one of old, of film and prints and chemicals, and the new one of the computer. Both reporters and photographers capture the who, what, when, where, why and how, or try to. That is the job.

It is later, after the story appears or the photograph is half-toned and printed, that perspective is added, and not by the reporter or photog. The words are then out of the reporter’s hands, and the photographs are away from the lens person. Now, the reader, the viewer, the analyst, the commentator, and, ultimately, as decades pass, successive generations of ordinary people make up their minds and render opinion. That is to the good, as debate and perspective are necessary for society’s health. It is at this point that the reporter and social documentary photographer can be satisfied that they provided the raw fact-gathering.

Yet, what of the subjects? Let’s look at “Migrant Mother,” who was for years unidentified. According to Public Domain Images Online, “Migrant Mother” was one of several images shot by Dorothea Lange in late winter, 1936, near Nipomo, California, where migrant workers (from Oklahoma and elsewhere) were in a dire situation since the crops they had come to harvest had been destroyed by freezing rains. On the following day, according to Geoffrey Dunn’s essay for New Times: San Luis Obispo, ‘Photographic License,’ the San Francisco News published (the picture) … that became known as ‘Migrant Mother.’

“But who was this mother? Lange didn’t ask her name when she took the picture and some others. (However) in the 1970s (‘Migrant Mother’) identified herself in a letter to a local newspaper editor as Florence Thompson, and this is the name now associated with “Migrant Mother.” In fact, in 1936 she was Florence Owens. It wasn’t until after World War II that she remarried and became Florence Thompson. Florence Owens Thompson’s reason for writing her letter, which was picked up by the Associated Press, was distress at the picture’s fame.

[pullquote]Dorothea Lange’s America, an exhibition of this legendary photographer’s iconic portraits of the Great Depression, is on view at the Hopper House Art Center in Nyack through August 18.[/pullquote]

“In the AP story, Thompson declared that she felt ‘exploited’ by Lange’s portrait. ‘I wish she hadn’t taken my picture,’ she (said). ‘I can’t get a penny out of it. (Lange) didn’t ask my name. She said she wouldn’t sell the pictures. She said she’d send me a copy. She never did.’

“Likely Lange couldn’t sell the pictures (since they were U.S. government property), but Thompson must have assumed she did when several appeared in the papers, and certainly after Lange’s assignment with the FSA ended, her career was enhanced by the fame she gained with ‘Migrant Mother.’ ” Public Domain Images Online says that “Lange … sent the photos to the Resettlement Administration in Washington, where (they) had an immediate impact on federal bureaucrats, who quickly rushed 20,000 pounds of food supplies to (a) pea-picker camp in Nipomo.” EyeWitnesstoHistory.Com reports that “After returning home, Lange alerted the editor of a San Francisco newspaper to the plight of the workers at the camp, presenting him with two of her photos. The editor informed federal authorities and published an article that included Lange’s images. As a result, the government” dispatched food to the camp.

So, the social documentary effort of Dorothea Lange had an effect, as do other such photographs, after the fact. The photos’ wider impact included influencing John Steinbeck in the writing of his novel The Grapes of Wrath.

It would take decades before Florence Owens Thompson received monetary benefit. In 1983, sick with cancer, she had a stroke that left her in need of constant nursing attention. The $1,400-a-week care was unaffordable. It is reported that her son Troy asked a newspaperman from the San Jose Mercury News for help, and a subsequent story brought national attention and donations. And so did powerful words. Public Domain Images Online said that one woman from California wrote: “The famous picture of your mother for years gave me great strength, pride and dignity – only because she exuded those qualities so.” It also notes that “the overwhelming response forced the Owens-Hill children to reconsider Lange’s portrait of their now 80-year-old mother in a new light,” how “deeply Mama’s photo affected people.” Lange herself would say years later, “There she sat in that lean-to tent with her children huddled around her, and seemed to know that my pictures might help her, and so she helped me. There was a sort of equality about it.” ‘Migrant Mother’s’ tombstone reads: “Migrant Mother – A Legend of the Strength of American Motherhood.”

So, you can see how the powerful images taken by photographers in all the years since the medium was discovered and developed can later affect people and society. Indeed, in the case of “Migrant Mother,” Lange’s photograph, once identified, was given added reporting by the revealed fact she was a full-blooded Cherokee. Her forebears were forced to relocate to what was then Oklahoma Territory to land that became lost in the “Dutstbowl” — from their homelands along what was known as the “Trail of Tears.”

In any age there are keen eyes which observe humanity, and the tradition continues as we see here with the work of seven women in The Lange Sidebar, who are following in Lange’s footsteps but also following their own paths in social documentary photography.

We must applaud these reporters with camera.