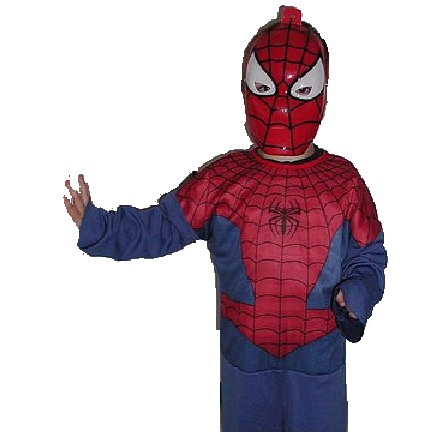 My husband, a comic book and action figure collector, wasted no time passing down his love of superheroes to our three year-old son. Together they made weekly runs to the comic book store, climbed up into the attic where the boxes of unopened Captain Marvel and Swamp Thing figures are stored, and watched old episodes of Spiderman cartoons.

Spiderman became my son’s ultimate playmate — when the movie came out that year, his likeness was everywhere. He received Spiderman shoes, shirts, sheets, cups, and pajamas as gifts from relatives. He ran around the house spinning webs and swinging from couch cushion to couch cushion. There was no question what he would be for Halloween. But Halloween came and went, and the Spiderman costume didn’t come off. By Christmas it was hideously stained, the seat was threadbare, and the seams were ripping. We had to tell Spidey that his costume “blew away” one windy night when it fell apart in the wash. “Can I look on the roof for it?” he asked.

We made a trip to Disney World a few months later, and by the end of our day in the Magic Kingdom, Buzz Lightyear was his new favorite character. It was time to pick out a souvenir, and a Buzz Lightyear costume had his attention. Since he had never quite gotten over the loss of his Spidey costume, we decided to splurge on it.

A few minutes later we were waiting in a huge empty parking lot outside the gates of the Magic Kingdom for the shuttle bus back to our hotel. “Can I put my costume on now?” my son asked. “Please? Please, can I put it on now? I’m gonna be Buzz Lightyear!”

Before we knew it, the costume was out of the bag. He put it on over his clothes. He sailed around and around the parking lot yelling “TO INFINITY AND BEYOND!” He looked as if his feet truly were about to leave the pavement. Then, they truly did. They slipped out from under him so that he landed backside first in a puddle of black bus grease. We watched him struggle with his embarrasssment, trying to decide whether to cry or not. In the end, he decided that it would be more fun to continue, and, after being convinced that the grease stain was a “special flying potion,” he persisted in his quest for the alternate universe.

On the bus he sat next to a little girl in a princess costume, also about three years old. She was thrilled to be sitting by Buzz Lightyear. She held his hand and asked to kiss him. Romance bloomed on the way to the Ramada. When it was time to get off the bus, I watched him swagger down the aisle, the costume’s “jet engines” slightly askew, the black grease now fully soaked into the seat. When he reached the end of the aisle, he turned to ask the bus driver a question, lost his balance and toppled backwards down the steps of the bus onto the pavement. He looked stunned, but then, finally, more out of exhaustion and embarrassment than injury, he broke down and cried with long, deep sobs. I picked my fledgeling Wonder Boy up from the concrete and carried him inside.

Wonder Boy turned 13 years old yesterday, and most signs of Spidey and Buzz have disappeared from his room. However, there is still a set of Spiderman sheets still in use on his twin bed. Yesterday he said to me “Mom, can I get some new sheets? Do you really think a 13 year old should be sleeping on Spiderman sheets?”

“Why not?” I said. Now that he’s a teenager, he needs those superpowers more than ever.