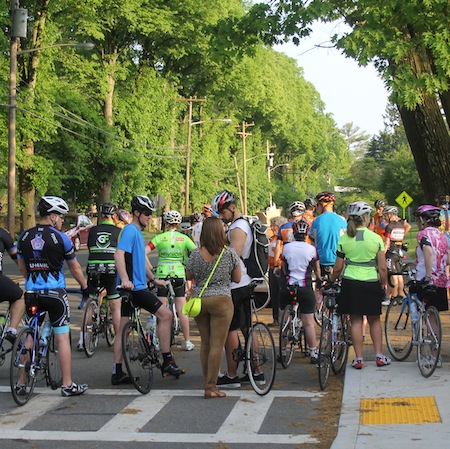 On Tuesday about 30 members of the Rockland Bicycle Club held a Ride of Silence between Nyack and Piermont escorted by the Orangetown and the South Nyack/Grandview Police Departments. The annual event, staged by bike clubs across the country and around the world, recognizes cyclists who have been hurt or fatally injured in car accidents.

We gathered for the Ride of Silence in front of Upper Nyack Elementary.  The ride honors cyclists who have been killed or injured by cars and calls on all to share the road safely.  Sadly, this year’s ride remembered in particular a local cyclist who was killed last year.  Janet Martinez died after being hit from behind on 9W.  We all wore black armbands to honor her and others who have died.  Those who have survived collisions with cars wore red armbands as well.

We were honored that a few members of Ms. Martinez’s family joined the ride today.  Her daughter came with her husband, along with two of Janet’s nephews.  It was very moving to hear them speak of their loss before the ride.  It was a somber reminder of the importance of our ride.

Riding silently and slowly from Nyack to Piermont gave each of us the opportunity to reflect on the need to honor the memory of those we have lost by working for safer roads.  We each ended the ride strengthened in our resolve to continue that effort.

Steve Brehl is a New City resident and a member of the Rockland Bicycle Club. Find out about their weekly rides, open to all cyclists, at RocklandBike.org. For more information on the club’s advocacy efforts to make Share The Road a two way street, email RocklandBike@gmail.com.