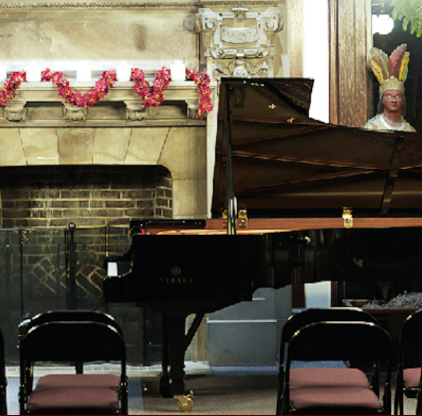 The Carnegie Room concerts at the Nyack Library have a rich tradition of bringing classical, chamber and jazz music to the village with origins going back to 1982. But the series has already spent its allotted budget for the year and until a recent fundraising effort closed the gap, the program was $11,000 in the hole. The Nyack Library Board of Directors is considering either changing or shutting down the series at the end of the current season.

Yashar Yaslowitz, who works for the Nyack Library as artistic director for the Carnegie Room series, says over 400 concerts have been produced at the Nyack Library over the past five years. “The Library Board is concerned that the Carnegie Concerts is a financial liability,” writes Yaslowitz in an email to supporters, at the same time reminding them of its unique niche in Nyack. “Carnegie Concerts are an amazing and unique library concert series.  The concerts are a cornerstone of Nyack’s artistic scene…filling an important cultural gap in the community since the Helen Hayes Theater closed in 2009. It gives Rockland, Westchester, and Bergen County residents the ability to attend fantastic concerts without traveling to New York City.” Yaslowitz says that the concerts also support local businesses and restaurants while promoting Nyack as a cultural destination.

Although the series may have a strong following, a recent survey of library patrons indicates that most of them probably don’t live in the communities which support the library through property taxes. Officials says a low percentage of local residents go to Carnegie Room concerts and that most attendees live outside of the Nyack River villages, Grand View, and Valley Cottage. Board members are concerned that if the series runs in the red, taxpayers are effectively subsidizing a program for non-residents.

Despite a difference of opinion about whether the series should continue to run as a loss leader, Yaslowitz acknowledges the library’s support. “The board is concerned that Carnegie Concerts diverts services from the maintenance, circulation, reference, and bookkeeping departments, creating a burden on library resources.  We are aware of the Nyack Library’s extraordinary commitment to supporting the arts, and could not operate without these essential services.”

Nyack Library Director Jane Marino says because of limited space and the costs involved with paying the artists and producing the series, the concerts don’t break even unless they sell out — and the intimate 110 seat venue doesn’t always sell out. “We have been running a deficit this year and there isn’t any more money,” says Marino. Although the red ink is now down to only $1500 a recent charitable donation, she says there aren’t any funds to run the program for the rest of this year. “In these times of lean budgets for everyone, we need to carefully consider everything that we spend.” Marino says she is hopeful the series can continue in the future in some form.

The library’s artistic director for the series and the Library Board have had repeated disagreements about how the series has been managed. After the library received a $70,000 donation on the condition of renaming the Carnegie Room to the Carnegie-Farian Room, Yaslowitz refused to change the promotional materials for the series to reflect the new name, only agreeing to the update after being threatened with termination.

A September 2011 Memorandum of Understanding between the Soiree Society of the Arts, which formerly managed the series, and the library names Yashar Yaslowitz as the artistic director of the series. “The Soiree Society of the Arts shall work to support the series through its membership drive, fundraising programs, and volunteers for production services so that the Carnegie Room concerts will not run a deficit of more than $2,000 for any fiscal year, July-June.” It also stipulates Yaslowitz will keep “a detailed estimate of all income and expenses,” an area that library officials say Yaslowitz has been lax.

Yaslowitz says he has a plan to rescue the series if the board will just give him a chance to implement it. “Our fiscal plan for next season includes generating income through ads in brochures and a concert playbill, as well as setting a donation/membership goal that must be met each season.” Yaslowitz says all memberships and donations received will be matched by a private donor.