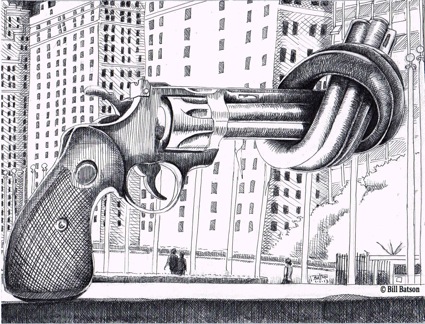 Voting for expanded background checks was the least Congress could do. Quite literally, it was the very least. Even so, this watered-down gun bill was patriotic and bi-partisan. It was smart. It was easy. It was something.

Forty-five senators failed to do their job based on political fear and calculations about the money of special interests like the NRA, which in the last election cycle spent around $25 million on contributions and lobbying. Of the 45 senators who voted against the background check, 42 received money from the gun lobby.

I’m disappointed and frustrated that those senators would so blatantly ignore the wishes of nine out of ten Americans on a topic of community safety. A vote that represents only eight percent of the country is unconscionable. A background check for every gun sale was a plan that had the support of the NRA not so very long ago. I’m heart-broken for the Sandy Hook families who pleaded face-to-face with many of these senators who blocked common-sense legislation that would have made it harder for criminals and people with dangerous mental illnesses to possess firearms. It was something. They did nothing.

If the vote of those senators was a vote out of fear of the NRA rather than moral obligation, would money from the gun-violence prevention lobby at election time change the outcome of a future vote? It did in a recent special Senate seat vote in Chicago, when Bloomberg’s SuperPAC helped get underdog Robin Kelly elected.

[pullquote]”I am asking every reasonable American to help me tell the truth about the cowardice these senators demonstrated.[/pullquote] I am asking for mothers to stop these lawmakers at the grocery store and tell them: You’ve lost my vote. I am asking activists to unsubscribe from these senators’ e-mail lists and to stop giving them money. I’m asking citizens to go to their offices and say: You’ve disappointed me, and there will be consequences.”– Former Arizona Congresswoman Gabby Giffords, excerpted from her NY Times op-ed on April 17

Former Congresswoman Gabby Giffords said is best in her NY Times op-ed. “If we cannot make our communities safer with the Congress we have now, we will use every means available to make sure we have a different Congress, one that puts communities’ interests ahead of the gun lobby’s.” We will go to the polls at the next elections to change the Congress, one vote at a time.

Nothing will change until advocates for gun violence prevention get as good at this game as the pro-gun side. And, you’ve got give credit where it’s due. They are good. Why shouldn’t they be? They are flush with money from gun manufacturers and they’ve been training and mobilizing their members since 1934 when the NRA begin their lobbying efforts.

We will do the same.

Before December 14, before those 20 precious innocent lives and the lives of six brave educators were brutally taken by a mentally-ill man with too many bullets, high-capacity ammunition magazines and a weapon designed for efficiency on a battlefield, before all that, I left activism in the hands of others and I blindly accepted that the leaders in our country were working in the best interests of safer communities. I see things more clearly now. I am awake and engaged and so are tens of thousands of citizens like me. There maybe four million NRA members, but there are 80 million moms in America. Yes, sadly we lost this first battle, but it’s only been four months since many of our coalitions have formed and we continue to gain momentum, national media attention and the respect and support of many legislators. When the money follows, so will the pink slips.

We will stay on and fight until our children look back in disbelief, as we do today, when we reflect about women’s suffrage and civil rights.

The game has changed. The violence is different and our federal laws must reflect a changed society. We must not accept the status quo. That’s why I support the NY SAFE ACT and created an online  petition  to counter the Rockland County Resolutions against it. That’s why I joined Moms Demand Action for Gun Sense in America and helped start a Hudson Valley Chapter. If you are outraged too, join me in making a difference. It’s the least we could do.