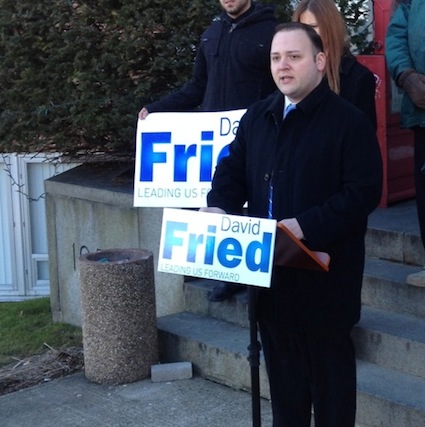 This was the week when the Rockland County Executive race got interesting. A Democrat in the race ran a play from the GOP “smaller government” playbook and received an endorsement from a Republican competitor. Another Democrat called it pandering for votes, and another said it’s a good idea — it’s just not legal and could have big unintended consequences.

David Fried, Candidate for Rockland County Executive, said if elected he would reduce the Rockland County Legislature from 17 members to 11. “Rockland County is out of step with other counties and we need a better structured government,” said Fried. An analysis by the Fried campaign concluded that compared to other New York counties, Rockland has a surplus of county legislators. Westchester, Nassau and Suffolk County legislators represent between 37,500 and 64,600 more constituents than their Rockland peers. “A smaller legislature is consistent with other New York county governments, is cost-effective, reduces political impacts on our system, and makes us more efficient,” said Fried.

Following Fried’s announcement, Rockland County Legislator Ed Day, the only Republican running for county executive, endorsed Fried’s initiative. “Wherever the source, no matter the party, if I come across a good idea to help the taxpayer, then I will always act on it and pursue it if it is at all feasible,” said Day, “Kudos to Mr. Fried for his independent thinking on this issue.” Day says he will bring up the legislation suggested by Fried if a review shows that it complies with previous court decisions governing the composition of the county legislature.

“A smaller legislature is a great idea to save $250,000, but Dagan LaCorte’s plan to reduce the county’s 60 departments, boards, and commissions by 25 percent, is the only way to get Rockland out of the $100 million hole that all of his opponents helped dig,” says Lacorte’s Campaign Manager Cristobal Slobodzian. “As an experienced executive, Dagan Lacorte does not need to conduct a public opinion poll to fix Rockland’s fiscal mess, and he won’t govern with his finger in the political winds.”

Ilan Schoenberger says he’s in favor of shrinking the legislature — and he voted to reduce it’s membership from 17 to 15 members after the 2000 census and brought the issue up again in 2010, however there was insufficient time to put the issue to electorate in a referendum as required. “The reapportionment or restructuring of the legislature, by law, can only be done once every ten years, co-incidental with the release of the census, “says Schoenberger. “Unfortunately, by law, we are not able to reduce the size of the Legislature until after the 2020 census.”

Schoenberger says there are unintended consequences to shrinking the legislature of which the public should be aware. “The result of reducing the legislature to 11 members would be a dilution of minority representation and make it far more difficult to elect people of color and other minorities to the Legislature of Rockland County,” he said. “While a 30 second sound bite might sound good, there are issues the public should be aware of if the county were to entertain reducing of the size of the Legislature.”

Here is Ilan Schoenberger’s complete statement on the impact of reducing the size of the Rockland County Legislature.

I was a member of the Legislature when we redistricted County government to go from a legislature elected town-wide to single member districts. At that time I voted to support reduction of the Legislature from 21 members to 17 members. I am the only candidate in the County Executive race to have voted to reduce the number of County Legislators.

At the next redistricting which was based upon the 2000 Census, I proposed that the Legislature be reduced from 17 to 15 members. The Legislature at that time refused to support this proposal.

When the 2010 Census was released I once again brought up the issue of reducing the Legislature from 17 to 15 members, but it could not be effectuated because a reduction in the size of the Legislature requires a referendum and there was not enough time to restructure the legislature before the election.

The reapportionment or restructuring of the Legislature, by law, can only be done once every ten years, co-incidental with the release of the Census. Unfortunately, by law, we are not able to reduce the size of the Legislature until after the 2020 census.

While a 30 second sound bite might sound good, there are issues the public should be aware of if the County were to entertain reducing of the size of the Legislature.

In addition when we redistricted the County Legislature as a result of the 2010 Census, hearings were held in every town in Rockland County. In several different towns people raised concerns about the increase in population in the Town of Ramapo while the 4 other town populations remained relatively stable or increased only slightly.

At one of our town hearings, the Mayor of a village in North Rockland, noted that the population increase in Ramapo would allow Ramapo to have 7 legislative districts wholly contained within the town and opined that it would mean a concentration of power since 9 legislators is a majority and therefore 7 legislators wholly contained within one town could shift the balance of power to the detriment of other towns and their taxpaying residents.

I made a pledge at that time that I would not support an additional seat being created from the Town of Ramapo in the County Legislature as a result of 2010 Census. And the final redistricting plan did not create an additional district within the town of Ramapo.

Even though I live in the Town of Ramapo I believe taxpayer money and the resources of county government must be equitably and fairly shared among all the people, towns and villages of Rockland County.

We may all wish to see the size of the County Legislature reduced, but it must be done in a manner consistent with protecting the interests of and with fairness to all Rockland County residents.