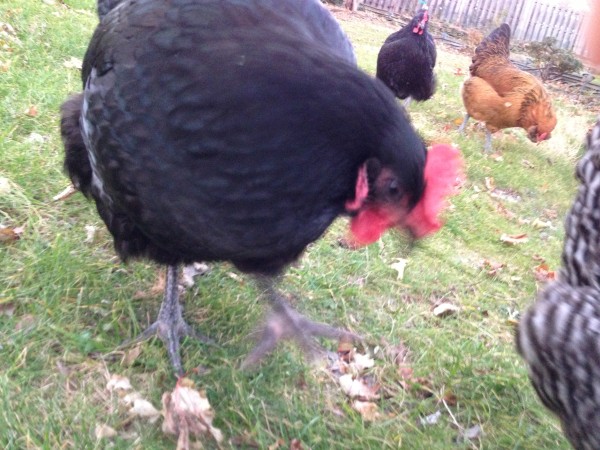 Ever since we got six chickens last Winter, the backyard hasn’t been quite the same.

The girls arrived last March and for the first week or two, we raised them inside our dining room. They were all cuddled together under a heat lamp chirping, while sitting inside a modified storage bin.  They quickly grew to the coop, which we made inside our garage.  It has a little door which lets the girls go outside.  The girls quickly grew and, to their enjoyment, got to roam the backyard eating bugs, grass and almost anything they could get their beaks on.

Much to our dismay, they frequently raided the garden and stole tomatoes, lifting them away before we could stop them with their beaks.  Then, once out of the garden, they fought over the tomato by stealing it out of each others mouths.

In July, while on vacation, we received a phone call from our neighbor telling us that she found a couple eggs inside the rabbit’s house.  When we returned, we found at least ten eggs inside the egg box, a specific area that is dark and full of straw where the chickens are supposed to lay their eggs.  After that, the girls began laying  six eggs everyday.  Their daily routine was to wake up, play in the backyard from sunrise to sundown, and then come in the fenced in aviary and sleep outside, under the stars. 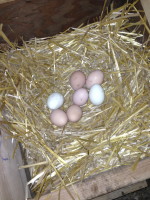 We feed them all kinds of food scraps, from banana peels to even their own egg shells which, for some reason, they enjoy.  The fall came but the girls still stayed outside all day and layed eggs normally.  They sometimes ate things they were not supposed to, like my sister’s Halloween pumpkin. Chickens need a certain amount of daylight each day to lay eggs so we kept their coop artificially lit at night, and they still laid five to six eggs a day.

In January, we had a tragedy.  The girls where playing in the backyard when a large falcon came down and attacked one of the girls.  Falcons kill by paralyzing their prey, and our girl Ellen was definitely paralyzed.  We later had to put her down, as she could not stand or eat.  This is one of the things that happens when you own chickens, and it is part of nature.  The other girls were greatly  saddened, and they didn’t lay eggs for the next month.

One more of the benefits of keeping chickens is being able to have great fertilizer. The fertilizer we make from their waste is very rich and we will be using it to plant our garden this year.  Having the chickens outside in the backyard reduces the amount of weeds and plant killing bugs, such as aphids.  As the days has been getting longer, the girls are back to laying five eggs a day, and we have boxed them and put labels on them.  The eggs make great gifts to friends and family and everyone always gives their box back for a refill.

Having raised chickens for over a year, I will tell you that although you won’t save money over store bought eggs, you will have a rich, rewarding time raising hens. After the food, building supplies for the coop and other costs, the hens end up losing you money. Some people in Nyack raise as few as two hens, but still manage to get enough eggs each morning to make a good omelet.  Overall, if you care about your health, the health of your backyard and garden, and producing some of your own food, chickens are a smart investment.