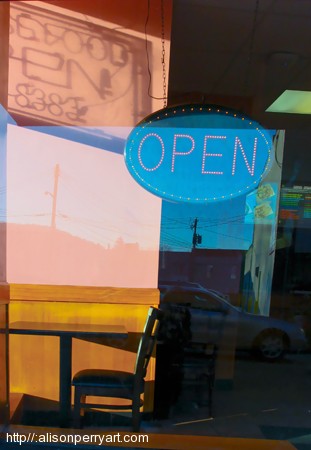 Driving through town late in the day last week, I noticed strong side light spilling through a large side window of a Main Street eatery. I pulled over to take a few pictures. When I stood on the sidewalk, I noticed the light, coupled with the front window reflections of passing cars and opposing buildings was altering my perception of dimensional space. Then I noticed a table and an empty black chair inside lending a bit of an enigmatic tone to the scene, which offered me a chance to change my creative intent.

Like many artists, I’m drawn to windows as vehicles of artistic expression. Some offer an opportunity for formal reinterpretation, some appeal to our desire to record, and others suggest a more personal exploration. Formally, the rectangle or square architectural symmetry of a window can act as an architectural grid, appealing to artists who like to alter forms and play with illusionary space. Windows can also be visual documents; the goods and products displayed behind them reflect culture and society in a particular place and time, while providing useful historical information later on. Windows can also be used to suggest a mood of isolation or loneliness, a barrier separating people from social activity in the world outside. 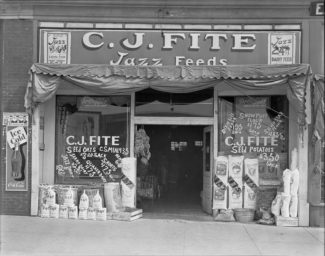 Edward Hopper and Walker Evans were the first artists to establish movements in art based in part on the relationship between architecture and windows because each understood that windows and architecture reflect society and the human condition.  Evan’s Depression Era B&W photographs documented signs and goods displayed in store front windows, including manufactured goods, culinary items, automated America and services rendered. 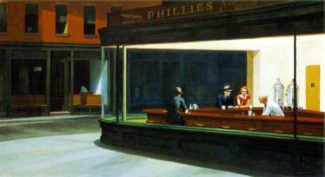 Hopper paintings that include window scenes suggest psychological detachment and isolation. They not only convey his interior mood, many of his night depictions of offices, apartments and store front windows incorporate a voyeuristic or predatory aspect. The painting: Night Hawks for instance, is a corner diner scene with two very large windows, showing us three customers sitting at a counter. Two of them are chatting with the fountain clerk, the other, a man, sits alone with his back to us. The four inhabitants do not sense what the viewer is made to sense – an outsider looking in. To further affect a predator-prey sensation, Hopper intentionally left an entry/exit door out of the painting because he was establishing a mood analogous with events leading up to the bombing of Pearl Harbor on the island of Hawaii. Inhabitants were not only isolated, they were sitting ducks, completely unaware of an impending Japanese attack. 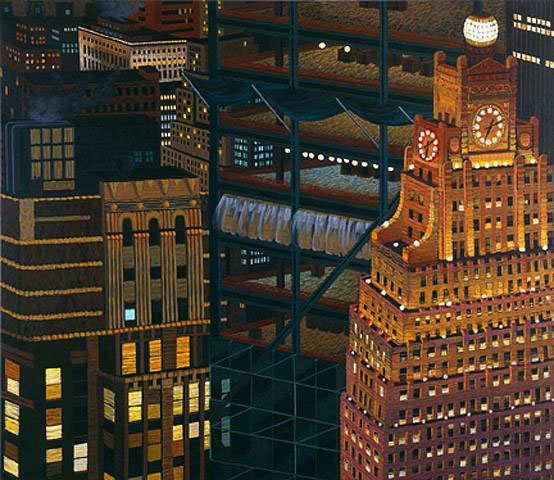 Conversely, a lit window can be a homing beacon, a familiar welcome sight for night travelers, workers and residents of large anonymous urban places, which may have been the intention of  Yvonne Jacquette in her oil painting, Above Times Square. Hundreds of lit windows help distinguish different high rise building designs in her oeurve of night time aerial cityscapes, but in the one shown here, a single small, plain window painted blue, separates it from all the others. This personalizes the scene to suggest ‘home’ in an otherwise vast concrete and steel jungle.