The painters of the Hudson River School of Landscape Painting (1825-1880) dramatized a reverence for nature, a strong American Idealism, a new start and an untamed wilderness that must not change. Their work was characterized by meticulous and realistic attention to detail, classic and romanticized rugged mountain and wilderness scenes, pastoral landscapes, illuminated forest interiors and placid or raging water scenes. These painters created a poetic feeling for nature characteristic of Romanticism, an artistic movement that flourished in Europe and whose members included Joseph M.W. Turner, John Constable and Caspar David Friedrich.

More than 150 years later artists like Stephen Fox, Yvonne Jacquette and myself continue to respond to the Hudson River within the tradition of American landscape painting. Although contemporary in approach, the subject matter remains highly personal and similarly romantic.

Brooklyn based painter Stephen Fox says he felt a little disoriented when he moved from Virginia to Brooklyn, until he discovered the Hudson Highlands. He writes about his work and his relationship with the Hudson River Valley:

I’ve been painting urban and rural landscapes for decades (mostly Virginia, where I lived for 30+years). Almost all have been nighttime landscape, a mix of artificial and natural light, and very little “pure” landscape, as the paintings tend to feature a balance of nature and the human imprint upon it. When I moved to Brooklyn in 1997, there was a period of time where I felt a little disoriented as far as finding my subjects, which took a very quick turn for the better when I pretty much stumbled onto the Hudson Highlands region in 2004.

I went out on a photo-jaunt on an atmospheric full-moon July night, zoned out when I intended to go west on Rt. 6 at the top of the Palisades, and crossed the Bear Mountain Bridge for the first time. I was absolutely enchanted by what the moon and fog were doing to the river and surrounding landscape. The painting, Above the Hudson, (oil on canvas, 2004), was from that night, my very first Hudson landscape. The photograph for the painting was taken from the far end of the Bear Mountain Bridge, looking south.

I had some hesitations at first about the Hudson as a subject—I always admired some of the painters associated with the Hudson River school, like George Inness, Frederick Church, Samuel Coleman. There was a show of American Luminism at the National Gallery in D.C. right after I’d begun to paint my nightscapes, and I could see how my paintings had as much a connection to that aesthetic as they do to Photorealism, a categorization sometimes given to my work. The question I found myself asking was: Can I approach this subject, the Hudson River, as a landscape painter, and have my own response that doesn’t borrow too much from the past? It felt very important to me that, if the Hudson River was going to lure me in to painting its mysteries, that had to be between me and the river, right now in the present, not me and the Hudson River School from the past. 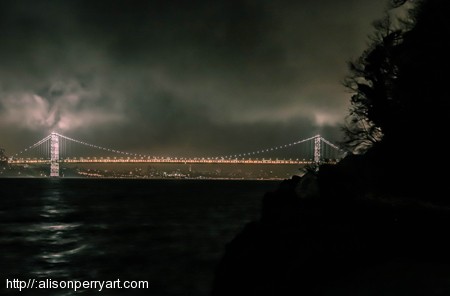 Stormy Night along the Hudson

I relocated to the Hudson River Valley in 1998, and completed my degree in studio art/painting in 2002 at SUNY Purchase. In college the pressure was on not to seek a traditional path. More than one professor suggested it better to stay away from landscape as it was considered traditional, therefore a “dead” direction. This became a bit of a catch-22 because I decided my senior thesis to be the figure in landscape. At the time figuration felt to be the most particular to my mindset relative to a long running interest in the American landscape. I also loved 50-60’s San Francisco Bay Area Figuration and Richard Diebenkorn, still do. What I didn’t realize at the time was that particular professors assumed my choosing landscape meant I was choosing a traditional path. It became clear later on a communication disconnect had occurred, but one which caused me to doubt continuing  that direction when school ended. Several years later, in 2006, I made a fairly simple painting with figures in landscape called Looking South from Yonkers along the Hudson. It felt right, but I was wrapped up in other things at the time and unable to pursue that avenue.

Four years later I discovered the HRS painters as I put together a bibliographic resource leaflet for the Nyack Library. The experience reignited my inspiration in landscape and craft. I began to pay attention again to nature, to minutiae, to luminosity, quietude, turbulent and leaden waters, searing cloudscapes and tiny human forms in the presence of industrialization, geologic time and a more heavenly master plan.

With a bit of investigation I discovered landscape painting has been in revival in America since the 1970’s. The only difference today is style, a Postmodernist approach which often incorporates man’s imprint, seen all over the landscape and in myriad ways. I concluded there’s nothing wrong with carrying on the HRS tradition, especially since art history repeats itself anyway and artists historically look to the past for inspiration. So artists like Stephen Fox, Yvonne Jacquette, myself and others will continue to pay attention to minutiae, diminished forms, vast open space, searing cloudscapes and a sense of quietude specific to the grandeur of nature, only now fully incorporating the imposition of man.

Yvonne Jacquette paints nighttime landscapes from high places throughout the United States including NYC, surrounding environs and the Hudson River. Hers is high art, (no pun intended), with a folksy attitude, which makes it that much more appealing. “In her work, Yvonne Jacquette observes the night city from a vantage point often located in high city buildings,” writes From SharksInk.com. “Hers is not a photographic record…but a very personal observation of the views below. In Hudson Reflections she looks west across the Hudson River and captures the play of light and reflections of lights from a myriad of sources piled upon the distant shoreline. The density and depth of color of the night river serve to make the lights brighter and more luminous and the river more mysterious.”