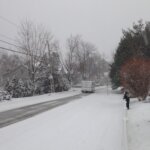 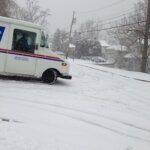 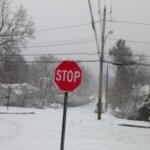 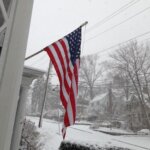 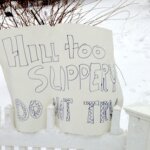 As of 10p on Friday, The Village of Nyack will institute a snow emergency to keep the roads clear for emergency vehicles and snow plows. Parking is prohibited on all streets from Franklin Street going East to the Hudson River bounded by Cedar Hill to the South and 5th Ave to the North. During a snow emergency, parking is free in the off-street public lots on Artopee Way lot, Spear Street, Catherine Street, Riverspace and the Nyack Marina Lots.

Nyack,  Feb 8 — On Fifth Avenue in Nyack, I watched as countless cars tried to muster their way up a snowy, slippery hill. Nemo, as it has been dubbed by the Weather Channel, is expected to bring Nyack over a foot of snow.  As the snow fell on the village, I stood outside watching cars slip and slide as they climbed the steep hill by Rockland Boces where 5th meets Midland Avenue.  Only a few cars could gain enough traction to reach the top.  I was scared for a Prius who attempted the feat of summiting Fifth Avenue in a blizzard with a fresh inch of snow on the ground.  Their wheels started to spin without the car moving and I knew they were in trouble.  The car managed to turn around and go back down the hill without crashing.

Two years ago, the mailman became stuck in a driveway on Fifth Ave due to heavy snow and the USPS had to call in a tow truck. We gave him hot coffee until the tow truck arrived.

Don’t forget to park in your driveway or in one of the public lots until the snow emergency is over. You will be able to park in the lots Artopee Way lot, Spear Street, Catherine Street, Riverspace and the Nyack Marina until 11a Monday morning.