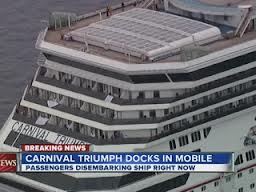 Unless you just awoke from a coma, or you’re the type who shuns any type of daily news broadcast, you’ve probably heard about the the Carnival cruise ship Triumph’s disastrous six day “adventure.” The Triumph, with over 4,200 passengers and crew aboard, was cruising the Gulf of Mexico towards Mexico when a fire in the engine room knocked out all power to the ship. Since modern cruise ships are, apparently, like modern cars, in that everything is computerized and, therefore, reliant on power, she ground to a halt. No power – no function. This meant not only no air conditioning in the cabins, but no refrigeration to keep food fresh, or pumps to keep the water (fresh and septic) flowing. So, you can imagine that, with that many souls aboard, the conditions would deteriorate rapidly – and they did – turning the ship into a stinking, floating cesspool! I’m sure that after two or three days, the conditions must have been downright deplorable. You can get an enormous amount of detail on what exactly happened in the five days needed to tow her to port in Mobile, Alabama by going on the Internet.

My focus is more on the response by the media to the crisis. Of course, a story like this doesn’t happen every day and, therefore, it is certainly newsworthy. However, the media was all over this story like (you’ll forgive the vulgar but rather apropos) flies on shit. My god, the coverage was wall-to-wall! There were daily updates -LIVE! News crews rushed to Mobile. There were helicopter flyovers. Speed boats were rented to seek out the Triumph at sea. Family members were found to provide worried commentary. When the ship finally got near port, the coverage got really FRENZIED! Stations interrupted their normal broadcasts to provide coverage of this breaking news story. CNN and others covered it LIVE for, seemingly, hours!! As it got closer, helicopters got near enough to see the sorry state of the ship and passengers waving and cheering from the rails. Commentary by the studio reporters was so sickeningly sweet that I actually got a cavity listening to it. Reporters and photographers mobbed survivors as they disembarked, treating them like conquering heroes. HOLY SHIT!! Can you say HYPERBOLE?! It was so over the top that E or Access Hollywood should have taken the lead on the story (which they did cover, in detail, on their programs!). ENOUGH!!

Look. I get it. It doesn’t happen everyday. The state of the ship provided striking video. And, if I were one of the passengers, I’d be plenty PISSED and take all the coverage I could get. After all, this kind of scrutiny can help to foster needed change in an industry. But, still, it becomes a matter of perspective – for ALL parties involved; passengers and media alike. Yes. It sucked. But no one died. No one had to resort to cannibalism to survive. No one contracted scurvy or some other flesh-eating disease. And it was five freakin’ days – FIVE DAYS! Most of us, especially those of us who just SURVIVED Sandy, have gone through that type of hardship and lived to talk about it. And, besides, SHIT HAPPENS, (pun most definitely intended). What occurred on the Triumph was certainly not the end of the world.

PERSPECTIVE. In this case it means using this as an opportunity to see things in a BROADER sense. These passengers lived in shit for five days and it became one the biggest stories in week filled with big stories. Well, ponder this for your perspective: there are millions of people though out the world who live under those condition EVERY SINGLE DAY. There are too many who have no access to fresh water, food, or decent sewage, much less air conditioning!! EVERY DAY of their lives.

PASSENGERS received compensation, including free cruises and cash, for their travails. In our world, for some of them, that won’t be enough. There will be litigation and recrimination. I am not interested in that. What I’m hoping for is if we can USE all this media attention where it might do the most good – to educate, inform, and provoke people to action. The ordeal for the passengers of the Carnival Triumph is over. After the anger wears off, they will tell of it around the fireplace and laugh. But let’s not forget those who live in squalor EVERYDAY. Perhaps, if we shine a little light THEIR way, we will actually do something about it.