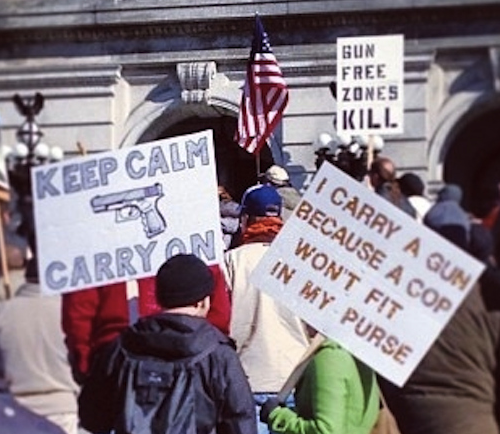 
Nyack resident Frank LoBuono grew up around guns and he says he knows how to use them, but he didn’t attend the Albany rally to defend the 2nd amendment.


I was raised with weapons (i.e. handguns) in my house. My father, a WWII combat veteran who served in Patton’s Third Army, made a bold, mid-life career change and became a law enforcement officer in Bergen County, NJ. I was a young adolescent. So, of course, his job would require him to own, train with, and possibly use, a handgun(s). And my father loved his guns. He really did enjoy them. He had a Smith and Wesson “snub nose” .38 with a custom grip for his service revolver. In addition he had a long-barrel .38, also with a custom grip, that he used for target shooting at the police range.

‘€œIt’s said that time heals all wounds, but time will never heal the pain felt by the families of Newtown. And we cannot let time heal the pain of our nation’s consciousness until we have taken responsibility and enacted legislation to prevent such acts of gun violence in the future. For too long, we have viewed these tragic acts of violence as inevitable or normal. They are neither.’€ — US Congresswoman Nita Lowey

In the warm months he tried to get to the range to shoot at least once a week. When he couldn’t get to the range, he would practice his form with the weapon while staring into their full-length dressing mirror. I always knew when he was practicing because I could hear the click of the hammer as he stared into the mirror and squeezed the trigger, slowly. He would do it dozens of times. Click. Click. Click. He loved it and he wanted to be good at it. And he was incredibly responsible with his weapons.

The VERY first thing he told me when he handed me his weapon to hold was, Frankie, ALWAYS remember what the purpose of a gun is – and that is to kill. It is NEVER to be taken lightly. NEVER. It is NEVER to be played with. And, therefore, NEVER raise it unless you intend to use it. Guns ARE a matter of life and death.

‘€œMoscow would be proud of our state legislature and executive chamber, but every New Yorker should be outraged.’€ — NYS Assemblyman Steve McLaughlin, R-Rensselaer County. McLaughlin is a co-sponsor of a bill by NYS Senator Kathy Marchione to repeal new gun control legislation passed in New York last month. An online petition drive has gathered over 120,000 signatures in support of the measure.

And only then he handed me the gun. Handing me the gun, even though I was young, was part of the lesson. He took the “mystery” out of it and gave me practical knowledge of what the true purpose and meaning of gun ownership was. My parents did the same thing with alcohol. They never hid it from us. In fact, beer and wine was readily available at our table. It wasn’t taboo. So, it was just never a big deal and none of us ever really struggled with alcohol. It really is about taking personal responsibility.

He taught me the skills needed to safely handle and USE a weapon. I often went with him to the police range. I hung out with policemen and their weapons, ate hot dogs, snuck an occasional beer, and even got to fire a weapon from the firing line (at least when I was old enough; 12-13). After my father passed away, I did not pursue target shooting with handguns but, rather, switched to shotguns and skeet and trap shooting. And I loved it. What’s not to like? It’s usually a day out in the country, practicing a very skillful endeavor. I even purchased a number of shotguns, including a few antique ones, for that purpose. I found some guns to be actually works of art. In fact, I bought the antique shot gun, not to use, but because it had beautiful carvings on the wood stock. It really is “beautiful.” So, I KNOW guns and I have ENJOYED guns.

‘€œThis is an important conversation for our children, for our communities, for Democrats and Republicans. Speaking is difficult, but I need to say something important. Violence is a big problem. Too many children are dying ‘€” too many children. We must do something. It will be hard, but the time is now. You must act. Be bold. Be courageous. Americans are counting on you. Thank you.’€ — former Arizona Congresswoman Gabby Giffords, who was shot in the head during a Jan 2011 campaign appearance where six people were killed.

In REALITY, because gun ownership has really become a part of American culture, especially to responsible owners, I know that we may never be a “gun-free” society. After all, our very country was founded (and sustained) through violent revolution. How The West Was Won can certainly be said to be at the barrel of a gun. Gun right advocates often use the 2nd Amendment as a shield to defend their position. However, most of them do not truly understand the spirit of that law, including WHEN and WHY it was written. Many advocates also cite the need for not only self defense, but to protect self determination (i.e. the government has ALL the guns and we have NONE), as well. Well, statistics refute the claims of guns as an effective means of self defense. And I find the idea that the government having all the guns and we having none as mostly paranoia. So, logic interrupts those arguments.

But there is more to this debate than just logic. There is emotion – raw, pure, emotion. Many Americans feel that it is there RIGHT to CHOOSE if they should or should NOT own a weapon. And America IS about choice. Many have fought and died (hate that we have to keep saying that, but, sadly, we do) to give us that RIGHT. And I have ALWAYS supported our right as AMERICANS to choose – across the board – a woman’s right to choose, a person’s right to marry whomever they choose, a persons right to privacy in their own home. This is no different. It’s about CHOICE. It’s always been about choice. Even so-called Tea Baggers can get behind that! They’re always whining about Big Government running our lives. Well, you don’t NEED the government to “regulate” this, really. It can be self-regulated by making the right choice – the rational, sensible, compassionate one. I’ve made my CHOICE. I’ve made it by renouncing (and DEnouncing) violence in all it’s forms. I’ve chosen to lock my guns away forever. I will not use them anymore – for any purpose. I’ve chosen not to watch violent movies or programs – especially those that have no point.

Something must be done to change the mindset of America. We have become obsessed with, not only guns, but violence. It seems that EVERY hero in our culture solves their problems at the barrel of a gun. I could easily name dozens of examples. It’s easy because they are pervasive. And no one is immune to it. I have called out Denzil Washington, a GREAT actor and, by all accounts, a GIVING and wonderful person, for taking the “cheap” money by playing ultra-violent characters. We need new THINKING ’cause something WRONG ’round here!! Too many of us our dying and we are left to answer the questions, “why” and “what’s wrong”? “Why are we so afraid”? There are too many widows, widowers, and orphans. We’re killing our own children. Yes, guns do most of the killing but it’s the PEOPLE behind the guns that we really need to address. Why must they resort to a gun to do their bidding? THIS is the ultimate question.

“Last month’s tragic school shooting must serve as a catalyst to demand common sense federal action that will stop the gun violence plaguing our communities. It’s sad that such a horrific act will finally force our nation’s leaders to make sensible changes to our gun laws and regulations. We owe it to the 26 Newtown victims – and, to the eight children and teens who die each day from guns in our nation.” — Rockland County District Attorney Zugibe.

I could go on with the practicality of sensible gun control. I could give you the statistics in either direction to support either POV. Some solutions might work. Others are folly. But, ultimately, that still does not answer the basic questions as to why we are obsessed with guns and violence and, more importantly, what can we do to stop it? I think that, like most great movements, the answer lies with the individual and the choice that he or she makes. We need new thinking to address the issues that have confronted us in the 21st Century. We can’t JUST rely on laws that were written 200 years ago. We have to make a choice NOW – based on the issues at hand NOW, with the thinking in place NOW. So, make your CHOICE. I have made mine and I am not afraid. I will ask, how many will put their fears aside and join me by renouncing violence and locking away your guns – forever.