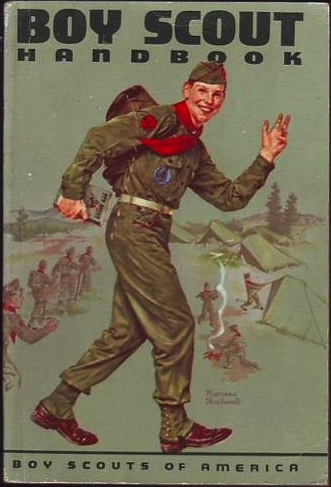 When I was a boy, many of my friends joined the Boy Scouts. Although we now lived in the suburbs, most of us were “city kids” and the Boy Scouts were not part of our reality. We played stick ball, wiffle ball, and other street games. But, still, we were out of the City and some boys were learning about a different lifestyle that included more outdoor activities like hiking and camping. A few were already living this way and seemed to enjoy it greatly. And these kids belonged to the Boy Scouts. Scouting gives young men an opportunity to learn more about, and connect with, nature. That was a routine that was becoming more and more appealing to me. Plus, they got to wear these cool uniforms and win awards known as merit badges displayed on a bright green sash! Many of my other friends felt the uniforms, which included shorts and a neckerchief, made them look like sissies. I did not agree. I thought that, when worn well, that uniform made a Scout look like a boy in charge. And I wanted to belong.

Although I liked the uniforms, in seriousness, overall, I really gravitated to what I knew of their message at the time: good, clean, discipline, as found in nature, created a good, clean, happy life. But I was to find out that there were issues beyond that positive message. As the child of both parents, I found myself conflicted. Allow me to explain. My father was an army combat veteran who found strength in the discipline forged in such a crucible – teamwork keeps you alive. I’m like that. My mother is FIERCELY independent whose strength lies in her family and few others. She’s a pull yourself up by the boot straps and your family will do the rest kind of person. Stella NEVER saw any need to join ANYTHING – including the Boy Scouts. I am like that, too. But the one thing both of them shared, was the most important thing. A group, ANY group, even those with what may appear to be with the best intentions, share a common Point of View (POV), and they expect you to share it, as well. By joining to be accepted, you must then accept their full and true message.

And so it was (is) with the Boy Scouts of America (BSA). There was always something about that squeaky clean, Christian image that ultimately rubbed me the wrong way. Stella, as well as many others, felt it, too. There was something elitist and phony about many of them. Certainly, not all Scouts that I knew behaved liked that. In fact, some of my best friends were Scouts! LOL And many of them did good things for the community. However, there was enough of that attitude to make it palpable to me. Of course, at that time, I could not attach that message to their anti-gay stance that exists even to this day. I don’t think that the word gay even existed then (the mid 60’s)! However, it was real and I felt it. Perhaps, that’s why I never joined! I am not gay but I never really had a problem with those who are. Besides, I suppose that Groucho Marx probably summed up my attitude best when he said, I wouldn’t want to belong to any club that would have me as a member anyway.

Gay Isn’t The Only BS Immorality

The Mission Statement of the Boy Scouts of America “…is to prepare young people to make ethical and moral choices over their lifetimes by instilling in them the values of the Scout Oath and Law.”

In addition to their ban on gay leaders, the BSA isn’t particularly fond of atheists or agnostics, either, according to Wikipedia. “The BSA believes that atheists and agnostics are not appropriate role models of the Scout Oath and Law for boys, and thus will not accept such persons as members or adult leaders.”

The national leadership of the Boy Scouts of America planned to announce the results of the gay leader prohibition policy in early February, but have put that decision off until May 2013.

Through the many years since, the BSA has had to answer many questions about that stance. And they have been defiant. Their moral code, Christian based, frowns, to say the least, on homosexual behavior. In fact, no openly gay person is allowed a position with the BSA. For a defense, the BSA had said that it has a moral imperative to protect boys against marauding, raging gay, Scout Masters. The have also claimed that, as a private organization, it is their right to dictate their own moral code.

Most of the claims made by the BSA, however, I find either baseless or outdated. First, many, impartial studies have shown that their is absolutely NO evidence to support the claim the gay men are any more likely to be sexual predators than heterosexual ones. Then, there is the Christian based “morality vs. legality”of a private organizations and their ability to make policy for themselves issue. Well, legally, they may find support. However, morally they may be wrong. I have always been fascinated by the incongruity of a Christian-themed organization, i.e. one based on the teachings of the Christ, discriminating against ANYONE. When I studied Christianity, I learned of a faith based on LOVE above all else – to accept ALL with open arms, to turn the other cheek. This has always been obvious to me. How could one even call himself a Christian and not live like Christ? Isn’t that the point of being a Christian?

Be that as it may, there is also a fairness issue here. In today’s society, we’ve actually grown accustomed to some things that were frowned upon just a few years ago. In fact, I heard this morning that the city of Paris has finally abolished a centuries old law that banned women from wearing pants within the city limits! My, how times have changed. And it’s time for the Boy Scouts of America to change – to get better. And they CAN get better by allowing gays to serve within their organization. Inclusion can NEVER be a bad thing. It certainly is the FAIR thing.

A petition claiming to have over one million signatures on it, is asking the BSA to allow gays within its ranks. It is hoped that it will persuade the BSA leadership, to change their charter and join the 21st Century by allowing gay men and boys in their ranks.

For me, it’s just so simple; if a person is qualified, then they are qualified. Their sexual preference makes absolutely no difference to me – and it never has – or SHOULD. I suppose that a gay man can teach a young man how to make a fire out of kindling just as well as a straight one. As I never actually DID join the Scouts, I supposed I had to learn that on my own. And that’s OK, too. But now, the Scouts have an opportunity to learn – and to teach – about fairness and inclusion. Perhaps they can create a Merit Badge given for TOLERANCE. Boys Scouts of America, LIVE your slogan. DO the HONORABLE thing. Make inclusion a TIMELESS value.