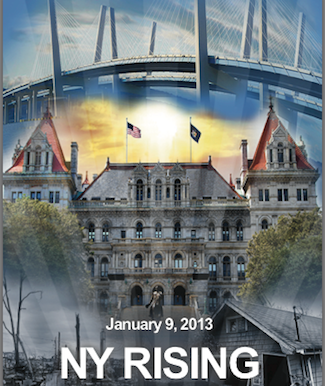 Nyack, Jan 10 — Hundreds of news accounts covered New York State Governor Andrew Cuomo’s 2013 State of The State address yesterday which included initiatives for gun control, upstate casino gambling, a higher minimum wage and woman’s equality. Depending upon your politics and point of view, there was something there for everyone.

In addition to his Powerpoint presentation, the governor also published a 312 page tome called NY Rising detailing those plans. It’s unlikely that many people will read it; if they have any awareness at all about New York’s annual State of the State address they get it from “the 4th estate,” the news media which covered Cuomo’s address. And what they have to say — across the state and the political spectrum — tells you a lot about what the gov has planned as well as the what editors’ thought you should know about it.

Here’s an analysis of headlines from 106 news sources which included the keywords “2013 Cuomo State of The State” in a Google News search on Thurs morning.

Almost 1/3 of all headlines mentioned guns, gun control or magazine capacities. A press release from the governor’s office accompanying the State of The State address called for a “Safe and Fair Gun Policy” which included a call to create the toughest assault weapons ban in the country, prevent private sales to prohibited persons, enhanced penalties, increased reporting by mental health professionals, revoking gun permits for convicted felons and combating gun violence in the state’s most violent neighborhoods.

Although this was the overwhelming choice of the editors who wrote the headlines, this wasn’t what the governor’s media relations staff people stressed in their press release about the speech. The gun control paragraph was listed under the innocuous title of “public safety” about half way through the press release, preceded by issues like economic development, raising the minimum wage and clean tech.

Hail To The Chief

Nine percent of the headlines included words that praised the speech using words like ambitious, aggressive, bold or sweeping.

Seven percent of editors used headlines about Cuomo’s initiative to raise the state’s minimum wage from $7.25 to $8.75 an hour to keep up with the cost of living and the 19 other states that have minimum wages higher than New York State.

Gambling On the Future

Cuomo highlighted a casino gaming plan upstate where revenue for up to three casinos would be split 90% / 10% for education / local property tax relief. News editors included references to casinos or gambling in five percent of their headlines.

About five percent of the editors subtlety signaled their readers that Governor Cuomo’s speech pandered to his democratic base, using words like liberal and left-leaning.

Now that a new Tappan Zee Bridge is a done deal — except for that untidy little detail about how to pay for it — the TZB didn’t get any love from the editors and barely a mention from the gov. The new design *did* make the picture that adorns the cover of the play book that accompanied the address. Newsday Rockland/Westchester did include a quote from Cuomo’s talk address about the new TZB. “We are building a new Tappan Zee Bridge. It is big. It is bold. It is beautiful. We did it in one year when they talked about it for ten.”

Mother Nature got mentions in the form of Hurricane Sandy, carbon caps and climate change in seven percent of the headlines.

Fully one third of the editors need to take some remedial headline classes, or to have their head examined to think that the average reader would read a story which only used the words “State of The State” in the headline (apologies to the gov wonks crowd, of course). With that said, these are a few of our favorites to grab your attention:

You can find a good short summary of the address at AllOverAlbany.com or in the governor’s press release. Should you decide to read the 312 page NY Rising playbook, please tell us what it said. Inquiring minds want to know.