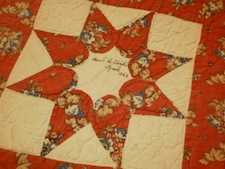 Here’s some history to warm you up through an unseasonably cold Winter. Just be careful to wrap yourself in the idea, not the 150 year old blanket.

The Nyack Star Quilt, created to support the young men who were leaving to fight in the Civil War, was signed by a group of local girls, mothers and a grandmother. It will be on display as part of a new exhibit,  19th Century Treasures:  A Quilt, a Diary, a Coverlet, a Notebook…. at the Historical Society of the Nyacks beginning Feb 2.

The coverlet in the exhibit was made in 1834 for Peter T. and Leah Stephens, a West Nyack couple. He was a wealthy farmer in West Nyack living in a grand sandstone house, once having served as a judge and Clarkstown Supervisor. The quilt is the type usually woven by itinerant weavers, often with a loom mounted on a wagon bed, usually using wool yarn spun by the owner. This one is unusual, being blue on blue, rather than the more common blue and white.

The diary, referred to in the title of the exhibit, is a 1881-1895 handwritten account by Bertha Frost, a farmer in West Nyack. She took over the family farm as a teenager on the abdication of her father (a “gentleman of leisure”) and managed it throughout her life. She and her mother sold eggs, butter and farm animals and took in roomers to eke out a basic existence. They were Friends (Quakers), referred to Sunday as first day, and were also vegetarians. She identifies herself as from Nyack-on-Hudson and tells about coming to town, sometimes on foot, to go to the library or catch the Chrystenah to Manhattan. She also traveled by horse and buggy and the Nyack-Tarrytown ferry to visit relatives in Pleasantville.

Finally, the notebook records details about life and history in South Nyack between 1799 and 1855. Written by Robert Hart, it includes items the author considered worth recording such as how the Cornelison farm comprising most of South Nyack was subdivided, how many shad his sons caught each year, the death dates of prominent citizens, events in the history of the Nyack Presbyterian Church, and the details of running his farm.

The Historical Society of the Nyacks is located in the Depew House, 50 Piermont Avenue, adjacent to the Nyack Library. The 19th Century Treasures:  a Quilt, a Diary, a Coverlet, a Notebook… will be open every Saturday from 1-4p through March.  Refreshments will be served at the opening on Feb 2.

In this article:Nyack History, Rockland County