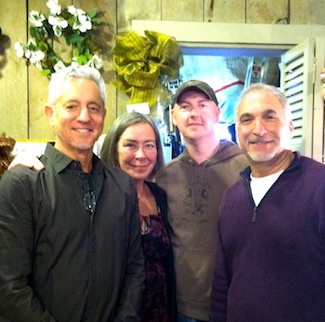 Nyack, Jan 9– Amidst the antique cherry armoires and marble topped side tables, Christopher’s Antiques bustled with activity in early January. The distinctive store was full of leftover holiday color offering a surprise around every corner. Five floors of eclectic home furnishings offered candy for the eyes and comfort for the soul. But soon, the iconic store on South Broadway will be colorless and quiet.

Christopher’s will be closing its doors after 44 years in Nyack at the end of this month. Now that the building has been sold to a developer, this special place where people from across the region and around the globe shopped for one-of-a kind pieces for over four decades will get a face lift.

“I’ve only lived in Nyack since 2005, but the very first time I strolled down our little town’s lovely streets, I was drawn to Christopher’s,’€ said Nyack resident Melissa Peltier. ‘€œI’ve found it to be one of the best antique stores I’ve ever seen in all my travels. Nyack will lose a part of its soul when Christopher’s closes.”

Owner Howie Siegal will be retiring to Long Island and Florida with his partner David Leader.  Siegel says he plans to travel, cook, garden and make more time for himself.

Siegel was 19 years old when he met Joe Christopher and began a 44 year career at the antiques store.  Siegel first opened ‘€œTummee Thyme’€ with a partner across the street from where Christopher’s now stands. Joe Christopher came to town and was working on the building when the two men met and began a long relationship. Siegel and Christopher became partners and he moved into one of the apartments upstairs. The two spent 23 years together working day and night.  Siegal took over the business and Christopher moved to New Orleans in 1993. ‘€œIt’s time,’€ Siegel said. ‘€œThere is no place like Nyack and I will miss it, but it’s time to move on. Siegel said that when he called Joe Christopher to tell him the news, the former owner laughed and said ‘€œit’s about time!’€

‘€œI am sad to see Christopher’s go. It’s more than just a store to me. The people here have been a part of my life for a long time,’€ said Store Manager Colin Holmes, who has been with Christopher’s for over 12 years. Holmes will be opening his own namesake store ‘€œColin Holmes’€ next month where Circa is now located on South Broadway at Burd Street. Trisha McAuley, who has worked at Christopher’s since 2000, will be joining Holmes in the new venture.

‘€œMy store will have some of the same feel of Christopher’s, but I will also be introducing new styles,’€ said Holmes. ‘€œI will start slowly and see what my customers want me to carry.’€

David Leader remembers the first day he set his sight on Christopher’s.  ‘€œI couldn’t believe it; my eyes kept moving from one thing to another, I wanted to take it all in.  I had never seen anything like it.’€